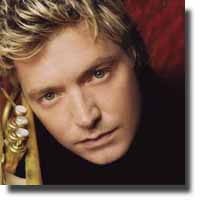 Chris Botti and the VSO

What a show! Not only is Botti charismatic, he has that certain rapport with his audiences. He is funny, a stand-up comic, and his versatily or as some critics coin him--eclectic, but in a good sense. He is able to combine classic and modern, and flexible enough to do both.

Take as an example "Time to Say Goodbye". It's almost identical to Andrea Bocelli's signature song, and obviously influenced by this Italian tenor. He recounts how David Foster said, "Let's fly to Italy and get Bocelli to sing this song." Just like that! This song was sung beautifully by one of his featured guests, tenor George Komsky.

That's the other aspect of what makes Botti click: variety. He brought in a variety of guests. Not only was this special presentation an instrumental affair, with his band composed of Billy Kilson - Drums, Richie Goods - Bass, Ben Butler - Guitar, Geoffrey Keezer - Piano, it had fabulous vocalists like Komsky. The other featured vocalist was Sy Smith. What a wonderful jazz singer, comparable to the jazz greats like Ella Fitzgerald. And what a rapport with the audience. She even came down the orchestra aisles so the audience could get a close-up look at her.Sting's La Belle Dames sans Regret, sung in bossa nova fashion was simply exotique.

He even made a quip about Bill Clinton who had invited him to perform at his home in New York. Imitating Bill Clinton's way of talking, he said, "Chris, that was great how you could reduce Miles Davies' 16 minute Concerto de Aranjuez in five minutes". What an entertainer!

His other renditions were fantastic: Nat King Cole's When I Fall in Love, which is the title of his recent CD; Leonard Cohen's "Hallelujah", Davies' "Flamenco Sketches" where he had his instrumentalists play solo numbers, as this is an improvisational piece.

The audience wanted more, after the last number, standing in ovation for more than a minute, and Botti was good enough to extend his 2.15h programme to another five minutes with his encoure number, "My Funny Valentine".

I'm sure Botti will be back. Two years ago, we reviewed him, and The Orpheum had a full house just like this one. His popularity gets him on tours all year round.

This was an entertaining concert, and the VSO under Maestro Gordon Gerrard was, as always, fantastic in their accompaniment of Botti and the featured singers and instrumentalists.

Looking forward to seeing him again, maybe next year?