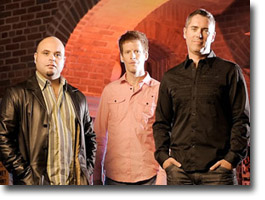 The Barenaked Ladies, just from the name of this group alone, shows how funky and funny they are. In a special Christmas concert with the VSO last night, they proved to be the reason why they won eight Juno awards and nominated for a number of Grammy awards.

They crack jokes for the audience, they do unique versions of songs, such as the classic "Jingle Bells" in their inimitable version, and then their popular "If I had a Million Dollars " which got the crowds rising and some dancing, the "VSO Dancers", quipped Creegan, and the audience, mostly fans, singing along.

I've heard so much about this group but never heard them perform. But after seeing them, I'm totally convinced why this group has survived since 1988 and still is going strong. Playing both the most popular, and some of their more obscure and original songs, they put on an entertaining and funny show. The best parts of the show is where they do their adlibs. In one adlib, followed by the Christmas song, "Shopping", we are told what the true spirit of Christmas is all about: shopping.

Other songs that got the audience going were "Too Little Too Late" and "It's All Been Done". Funny and clever are the words to describe The Barenaked Ladies. They know how to treat their fans, and they know how to put on a good show.

The audience didn't leave until they sang another encore, despite the fact that it was 10:15 pm. They had gone overtime, but they gave in to the audience and sang some more.