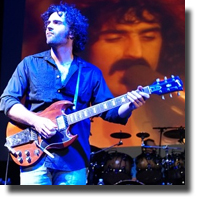 If you like the father, you’ll probably appreciate the fun that Frank’s little boy, Dweezil, brings to his stage performance in Zappa Plays Zappa.

It is a rainy Saturday night, the lines are long; the wait is cold, but the foreshadowing winds of changing tempo are strong; they blow us upstairs into the Commodore Ballroom and as we fill the house to receive a musical revelation, there is soon no room for anybody on the massive dance floor in front of the stage to do anything more than a shimmy-shuffle-down. The difference between Little Willy and little Dweezil , though, is that Frank’s boy really does know when and how to go home, and he brings this sell-out crowd with him on his way there again and again.

‘Brilliant but crude’ is one way to describe the lyrics of Frank Zappa, and vocalist Ben Thomas does a pretty fine job of bringing all that dynamo hum to life in this son of a blazing gun of a show. There’s no doubting Thomas has an edge and a sizzle to his style, and none ought dare emulate the cover boy of Joe’s Garage without plenty more than a dash of pizzazz, but vocals are only a small part of this night’s performance.

Dweezil’s electric guitar is the big thing most die-hard-core fans have come out tonight to see, and as his blazing fingers alight for flash upon flash upon flash of brilliant spontaneous combustion, he makes his instrument speak with an abandoned almost reckless precision throughout the amplified room, directly into the rapt souls gathered at his audible altar of artistry.

Just when it seems at times that the man is shredding on cue, he accelerates to accentuate a riff in an intensified arpeggio, or explodes the myth of predictability with an intriguing series of inversions. This is what ears are for.

Every now and then a smoking hot backup band comes along to make a decent guitar player like Frank’s son look even better than the son of a guitar legend ought to look. Joe Travers kicks more than a pedal on drums and his solo work is as astounding as the phenomenal work of Pete Griffin on bass, Chris Norton on Keyboards, and Scheila Gonzalez on saxophone. Together they rocked the house.