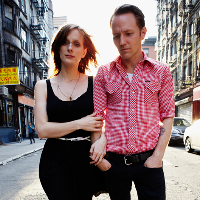 What if the Greek myth about Echo having been a nymph cursed by Hera, the Queen of the Gods, to only be able to say what others had just said is true? Then surely an echo is a curse. The husband-wife folk-rock duo known as Whitehorse craft their musical compositions so as to bring a blessing from such a curse with rich and evocative blends of echoing looped tribal drumbeat strains, vibrant vocals and keyboard melody and chord cuts designed to accentuate the lustrous lyricism of their minstrelsy.

In their Commodore Ballroom performance, Whitehorse kicked off the Canadian leg of their international tour with a performance full of relentless energy. Luke Doucet and Melissa McClelland tangle complex percussive and keyboard layers together, taking one sensually circuitous hook of a detour after another melodious hook to follow each other home again and again with the help of looping pedals which accentuate their sizzling guitars and their luscious lost-in-a-love-affair-with-music-and-each-other vocals.

At times, Ms. McClelland brings all the evanescent pathos of a young Emmylou Harris to her music, and the distinctively sultry soulful synergy that she and Mr. Doucet share is truly mesmerizing.

Whitehorse had the audience hooked immediately after they laid down the heavy drumbeat loops and honey-lipped harmonies of their opening number, "Killing Time is Murder." As they carried on for nearly two hours, performing lyrical gems such as "Achilles’ Desire," "Devil’s Got A Gun," "Out Like a Lion," "Annie Lu," "Emerald Isle," "Broken," and "Night Owls," this couple proved beyond a doubt that they are a musical force to be reckoned with. Some say it is distasteful to watch a married couple embrace in public, and that may be true, but the musical embrace that is the Whitehorse experience offers a rare delight in which public participation is a part of the pleasure. Clapping and dancing along with the music, the audience clearly appreciated this concert.

After a solid performance, Doucet and McClelland came back for an encore rendition of the Bruce Springsteen classic "I’m On Fire," which they positively made their very own, and the audience ended the night singing along and dancing to the music of the Whitehorse that took us all along for a fantastic ride.