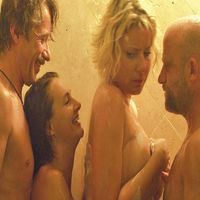 You'll die laughing at this romp of a comedy, and the director was in the audience and quipped that there'll be more time with Q & As since the film is short. Hrebejk is funny himself and answered the questions jokingly, sayng, for one, that the sequel to this would be a quaternity of the couples' children. Hrebejk is an international figure because of his sense of humour, and the audience gave him a warm applause. Half of them were Czechs who laughed even before the interpreter gave the translation of his comments, I've reviewed him in past firlms, including Divided We Fall, and he has that black, satirical way of critiquing institutions and religions--in this case, marriage.This film reminded me of Bob & Carol & Ted & Alice,a 1969 American film, when group sex among married couples, started being a fad. The theatre was jam-packed, and be sure you reserve your tickets because this will definitely be a sold-out show. 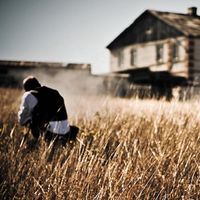 The Russian mafia is the main theme in Russian movies these days, and this film is another example of it. From Moscow with violence is the topic of this film and armed strangers hired by a competing mafia gang go all the way to the Russian steppe to assassinate Viktor, the leader of another mafia gang. It's all shooting towards the end, but what is surprising is the ending where Viktor's demise is nothing related to the mafia. This is an excellent film. Cinematography is beautifully done, and the dialogues reflecting Russian society are tainted with black humour. In one scene, Viktor's uncle comments about how untidy Russian society is. He says that you can tell the character of the Russian from his toilet. Unlike the Germans who keep their toilets clean, the Russians on the other hand never keep them clean. And that's what Russia is all about. Interesting insights on Russian society are cleverly inserted in other dialogues in this film. 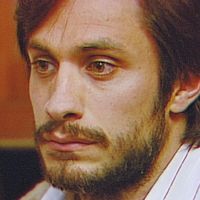 GR7 is the biggest theatre in the Empire Granville Cinema complex, and despite this, the opening screening was jampacked. And you know why? Gael Garcia Bernal is in it. And I'm sure it's going to be sold out in the next two screenings if you don't get your tickets now. The story is the finale of Larrain's trilogy on the Pinochet years. Filmed as a half-documentary, half-satire on Pinochet, Bernal plays the role of a skillful ad man who creates the "No" TV campaign ads when Pinochet calls a plebiscite in 1988 giving in to international pressure, asking the Chileans if they want him to stay in power for the next eight years. More than 50% voted "No", and all the rest is history--his eventual arrest and downfall in connection with human rights violations and embezzlement. 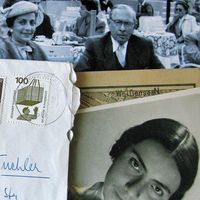 This documentary deals with secrets about the holocaust, and what makes it curious is the fact that the filmmaker's grandparents were good friends of a member of the SS, Baron von Midenstein, before and after World War II. When Goldfinger's grandmother passes away, he discovers letters, photos and documents in her flat, and what bothers him the most is the fact that he unearths documents showing his great grandmother was sent to a concentration camp and murdered. Everyone wants to forget the past, but he is insistent and goes to Germany to meet the Baron's daughter and her husband, to probe more into this. He does more research in Germany about the Baron and finds out that he was indeed a member of the Nazi party and worked with Goebels. Everyone including his mother wants to forget about the holocaust but not Goldfinger. This documentary proves that there's no such thing as "Let bygones be bygones". 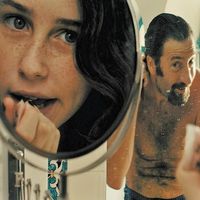 The title of this film is taken from a dialogue between Libby (Elya Inbar) and her father Shaul (Gur Bentvich) when he tells her that his lie was a white lie and she answers "off-white lie". And that's what this film is about. It's all about Shaul lying to his daughter every step of the way and getting her to also lie along with him. They pose as refugees just so they can have a roof under their heads, and end up living gratis at an affluent home in Jerusalem. There were some funny and poignant moments in this father-daughter relationship. The only inconvenience the audience at the opening on the 27th was a technical one where the film had to be stopped for a few minutes because the images weren't projecting correctly. 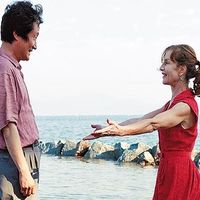 Watching Isabelle Huppert portraying a French woman with three different roles in three different stories was like watching an ESL lesson. The dialogues repeated themselves as though one were learning how to speak English. Naturally, the intention of the director was to come up with a funny film, and the audience did laugh occasionally, but the humour was an educational kind of humour, one that a student learning English would laugh at: "Where is the ;lighthouse?" asks Huppert. The lifeguard doesn't understand, and so, she gestures, and finally he understands but then tells her he doesn't know where it is. It's this kind of humour that probably would elicit more laughter from a Korean audience than a Vancouver one. But personally, I found Huppert delightfully funny. 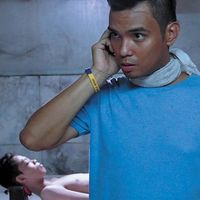 Ever since Lino Brocka in the 1980s started filming the poorest of the poor slums of Manila, some new directors like Sta. Ana have followed suit. In this particular film, we see a new angle to the way the poor can generate money to survive. It shows a portrayal of the sakla (an old Spanish card game) played at wakes for the dead. Makoy (Kristoffer King) makes his living by buying unidentified corpses from morgues in order to stage fake wakes so that sakla can be played. Tjhe film's topic is interestingly revealing and informative about this aspect of the "black economy" in the slums of Manila, and is cinematographically directed in a somewhat reality fashion, as is the style of filming these days. The film begins and ends with a boy leading the hero to a wake only to find out tragically who the deceased is. This slice of life film parallels the poverty we see portrayed in movies and documentaries from developing countries like Brazil (the favelas) and other Latin American barrios wreaking of poverty. 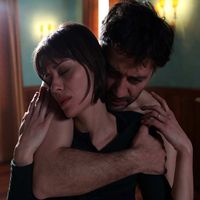 Quando la notte (When the Night)

This is a beautiful film, with splendid cinematography, and the Italian Alps are so much like our Rockies--mountains, fir trees and snow. The love story is exquisite. In the beginning, we have our heroine bothered by the crying of her two-year old son, and we feel that too as we are irritated and in fact, you're almost tempted to walk out of the theatre because of this constant crying of the baby. But then, as the story develops, Marina (Claudia Pandolfi) falls in love with the owner Manfred (Filippo Timi) who saves her child, and likewise, he falls in love with her for saving him when he falls into a crevice. But the ending is even more beautiful when they meet again after 15 years, reminiscent of Lelouch's 1966 film, Un homme et une femme. 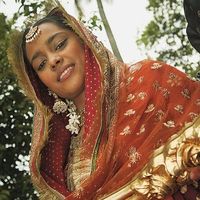 The magical realism of Gabriel Garcia Marquez must have influenced Salman Rushdie who wrote this award-winning novel which he himself adapted into a screenplay. He uses historical fiction in this 2.5 hour movie which I must admit was excellently executed by Mehta. This epic film is an allegorical tale of two Indian children, one a poor Muslim whose mother dies at childbirth, and the other, a rich Hindu, both born at midnight on August 15, 1947—the day India became independent. Both are switched at birth by the nurse who felt that there should be no distinction between rich and poor. The story is told from the point of view of the poor boy, a bastard, sired by an old Englishman. Despite its length, Mehta's directorial expertise somehow is able to hold the audience spellbound. 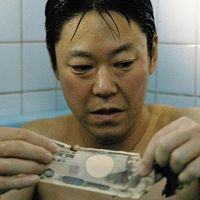 Just as in medieval times you had the morality play, this film might be classified as a modern morality movie where sinners repent at the end and atone for their sins. In this film, a young couple scam others with the clicheic sad story and crocodile tears, and do get away with it, and as any well-made crime drama, the long arm of the law catches up with them. There are, of course, sex scenes to spice up the story, as well as violence, but all in all, the film was too long and I found a need for editing in some of the long tedious scenes. But it's great to have a female director in a country dominated by male film directors, and apparently, Miwa is an up and coming director in her country. 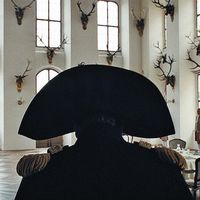 For opera lovers, this film adaptation of Carl Maria von Weber's 1821 opera, Der Freischutz, set during the Napoleonic wars, is a must see. Richard Wagner was influenced by this composer, and I hope Vancouver Opera would consider including this work in their upcoming shows. Opera soloists Juliane Banse, Michael Konig, Michael Volle and Rene Pape sing splendidly to von Weber's music, accompanied by the London Symphony Orchestra. Goethe's Faust was surely an influence here as we see the devil Zamiel making a pact with humans. Neubert uses supernatural film techniques especially in the scene at the gorge, and his close-ups are excellently shot. 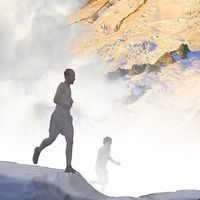 Just south of our border, in Bellingham, a racing event which became today's annual Ski to Sea race, took place from 1911 to 1913 where amateur athletes risked their lives in an endurance race to climb up Mount Baker. This is a well-made documentary showing archives of the race and taped interviews from the runners. I wasn't even aware that such an event took place, and I live just minutes away from Bellingham. This is a must see for Vancouverites, especially runners and sports people. 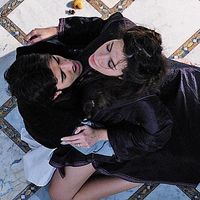 Love in the Medina 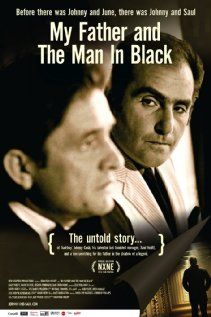 My Father and the Man in Black

This is the untold story of Johnny Cash and his manager, Saul Holiff, and a son (the filmmaker/director Jonathan Holiff) who surprisingly discovers materials about his father and "The Man in Black" legend. This is an excellent documentary depicting the ups-and-downs relationship between Johnny Cash and Saul Holiff. But what is more interesting is how Jonathan discovers what his father thought of him as he discovers secrets in this maze of tapes and letters left behind by his father who committed suicide without leaving a note behind. But what was superbly done was the technique in which the film was done. For example, the filmmaker would take actual clips from Johnny Cash's performances, but then, juxtapose them with an actor simulating Cash when he has, say, the car accident. The voiceovers were excellently edited. We hear tapes of conversations between Cash and Holiff. And these were the actual tapes which Holiff recorded when he spoke to Cash over many telephone calls. The film, contentwise and also from a technical standpoint, was simply superb. Many film critics have rated 9 out of 10 stars for this documentary.