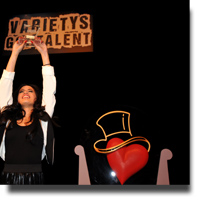 Jerrica Santos, looking chic in pink stillettos, puts on a stellar performance in winning the Variety’s Got Talent competition at the River Rock Show Theatre Saturday night. Santos is a confident, powerhouse singer who aces Gnarls Barkley’s "Crazy" and the audience loves it. Santos is invited to perform on the live Variety Show of Hearts Telethon that airs on Global BC on February 16th and 17th.

Jerrica Santos, 24 years old, wins out of 500 original contestants and 9 others in tonight’s final competition. Bruce Allen is exactly right. “You set the bar pretty high.”

The winning trophy is presented to her by Judge Shannon Tweed-Simmons. Tweed-Simmons stands out as a judge in my books, because she is earthy and straight forward in her critique of the contestants. Her enthusiasm, meaningful comments and actions were a terrific bonus to the show.

The other top two contestants are Jessika Harling, who sings Etta James’s "Something’s Gotta Hold of Me" and Shawn Hallgren, who sings Eric Clapton's "Change the World." Hallgren’s strongest talent is his great guitar playing. Dani Cheniwchan is the People’s Choice winner.

The Great Canadian Gaming Corporation’s Howard Blank emceed. Blank lets the first contestant leave the stage before the judges have a chance to give her their critique. I also wonder about directing unnecessary questions at contestants before they perform since it makes many of them more nervous.