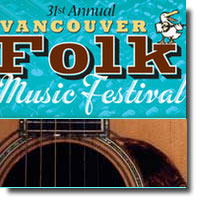 If there are people out there who still don’t believe in global warming, they should have checked out the Vancouver Folk Music Festival this past weekend. I’m sure all that fine, hot music pouring out of Jericho Beach must have raised the planet’s temperature.

The Festival continued with the same successful format used in previous years: seven stages operating continually from 10:00 am through 5:00 pm Saturday and Sunday, and three evening Main Stage concerts from 5:00 pm through about 11 pm all offering a smorgasbord of eclectic, musical gems from around the globe. Calypso, Quebecois jigs and reels, hip-hop, rap, traditional folk with social commentary, dub, gospel, blues, Chinese string, Indian fusion, jazz, and many more musical styles were all represented at the Festival. I had the usual dilemma: who to see and what stage to visit? Do I visit Blues Routes: Jaipur to Timbuktu on stage six or Under African Skies at Stage four? Two of the many collaborative workshops occurring throughout the Festival.

Many big name acts like Michael Franti/Spearhead and Spirit of the West were in attendance this year, plus local BC folk, and many performers playing traditional folk music from their part of the world. A very exotic blues sound and look from the Etan Finatawa group from Niger, clad in wonderfully colourful garments, and Bachir Attar and the Master Musicians of Jajouka from rural Morrocco, whose traditional songs are about the everyday struggles faced by nomadic people were wonderfully uplifting with a mesmerizing, meditative sound.

There were a few changes at the Festival this year including no large screen at the Main stage, and a fee for the program, but the same good food choices and clothing/jewellery and other goods for sale in the artist’s bazaar. The Festival was well organized (we won’t mention the parking problem) in that the transition from artist to artist, between Stage set ups, was swift and timely.

Friday evening’s Main Stage concert featured, amongst others, Grammy winning and Oscar nominee Aimee Mann, who had a great tight band with a very orchestrated sound. Her style is more soft rock than folk and I particularly enjoyed her cover of Elton’s John’s “My Father’s Gun” from his Tumbleweed album. To close out the evening concert we listened to the high energy, charismatic, LA, nine piece group Ozomatli, who were a huge hit with the crowd. We loved their spicy hip hop, rock, salsa, funk and we danced up a storm. A great choice to end the evening,

Dubblestandart from Vienna were back again this year and their techno, reggae, dub and synthesizer sound, coupled with their socially conscious lyrics, were very popular with the younger crowd. One of my favourite sessions was “Sounds and the City” with local musicians Delhi 2 Dublin sharing Stage 5 with locals DNA6. A mix of great Celtic/Indian fusion, and hip hop/rap and the crowd ate it up. I also caught the “Blues Route: Jaipur to Timbuktu” session and “Slide to Freedom”. The latter session being “Indian slide guitar meets North American Dobro and slide guitar” by the two slide masters Doug Cox and Salil Bhatt joined by Tabla player Vineet Vyas - a masterful session.

There was the usual Sunday morning rush for a good seat at Stage Two’s “Higher Ground” 10:00 gospel session. The Sojourners, with Jim Byrnes, moved us all with a beautiful, soulful version of “Wade in the Water “and “You are my Fortress”. The energetic and fun jazz singer John Boutte, from New Orleans, with a great personality and voice, and Dawn Tyler also sang their spiritually oriented material.

There were many moments of delightful, musical serendipity throughout the Festival. Stumbling on Harry Manx and Kevin Breit singing and playing their slow, soulful version of Bruce Springfield’s ‘I’m on Fire”. Hearing Meaghan Smith’s voice wafting from Stage 2 singing Bart Howard’s “Fly Me to the Moon”. Sharing a bench with one of the members of Kobo Town who educated me on the roots of Calypso music, The Women’s Voices Rising group singing “Will the Circle be Unbroken” and many, many others.

And so, another fabulous weekend of great music and fun by the beach came to an end. A traditional, historical ending to the Folk Festival might be “Peace and Love, brothers and sisters,” but this year I think “Let’s give it up for the 2008 Festival!” might be more appropriate. By necessity, the Festival is changing and growing, and attracting a younger crowd, and the Festival’s definition of folk music now joyfully embraces the diverse and multicultural world we all inhabit