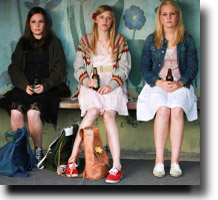 Turn Me On, Goddammit! A film by Jannicke Systad Jacobsen

The dry, low-key humour that characterises Nordics is apparent in this film. When this 75 minute film ends, Alma (Helene Bergsholm) asks her mother if her new boyfriend Artur (Matias Myren) can sleep over. Her mom bluntly answers: "No!" And that's how the film ends. I found that funny in the Norwegian sense.

15 year-old Alma is dealing with raging hormones, indulging in phone-sex, satisfying herself and fantasizing about high-school heart throb Artur. She gives the finger every time she takes the bus and sees the sign Skoddeheimen, There's not much else to do in the remote village except drink beer and attend lame school parties.

I couldn't help but see the similarities of Norwegian teens to those of Canada and the USA. In one scene, an underaged girl gets someone to buy beer for her, which is what our teenagers do.

This film has been widely publicized and a lot of reviews have been written about it which just shows that it's quite a popular film internationally. 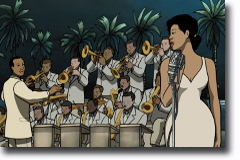 This is a screwball musical comedy, very entertaining, and writer-director Serrano copied a lot from the Hollywood film musicals. However, you can sense he parodies this genre of film. You see actors and dancers bursting in song and dance, when they're not supposed to, and there is an element of fantasy when Monica (Juana Acosta) starts flying when she is in love. It's silly and absurd in an entertaining way.

The plot is quite interesting and funny: Married Claudia (Colombian star Angie Cepeda) has been dumped by her lover, Pablo (Quim Gutierrez). Aided by her sister Monica, she plots to win him back, but then Monical also falls in love with Pablo who currently has a psycho girl friend, and she follows him to Tenerife (Canary Islands) because she knows Claudia is after him. The film just becomes quirkier and stranger as the plot thickens into sub-plots.

It's the kind of film you'd like to just enjoy and laugh at. The zany ensemble cast keeps you smiling throughout the film, and it's interesting to see this type of a film. Spanish films are known more for drama rather than comedy, and it's quite refreshing that we have a director like Serrano who does this type of film.

Right after Franco died, Spain became a cestpool of pornography and amorality, and new directors like Almodovar came up with nudity in film. I still remember the young Antonio Banderas and Penelope Cruz nude in his films. These two had their start with Almodovar with films dealing with sex. I also remember seeing transgender films all defying the uber-morality imposed during Franco's regime.

The new generation of directors follow this vein, but in a more take-forgranted attitude. It's taken forgranted that even if you're married, you can still go ahead and have extra-marital affairs. The shock element that was evident in the films of the eighties no longer applies. Immorality/ amorality is today a way of life for the post-Franco generation in Spain.