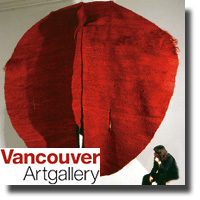 WACK! Art and the Feminist Revolution

We females who fall into the category of baby-boomers will likely feel drawn to the exhibition now on display at the Vancouver Art Gallery. Spanning the time from 1965 to 1980, the collection showcases works produced by women during the height of the feminist movement and the impact the movement had on art. It is difficult to miss the huge, suggestive wall hanging by Magdelena Abakanowicz that dominates the entrance of the gallery and this sets the tone for the fascinating collection of works that have been assembled for this exhibition.

The collection is organized, not chronologically, but rather, in eighteen thematic areas – including paintings, sculptures, photography, film, video and performance art. One is reminded of the courage of many of these revolutionaries who, at the time, stepped well away from accepted female behavior, determined to make a statement. Lorraine O’Grady’s Mlle Bourgeoise Noire, Judy Chicago’s “The Dinner Party” and Kirsten Justesen’s Sculpture II provide strong examples of the depth and diversity involved in this compilation. Canadian artists, selected by Vancouver Art Gallery chief curator/associate director Daina Augaitis, are represented within the 120 from 21 countries.

The ‘Swinging’ Sixties” was a decade so labeled for the widespread libertine attitudes of many who questioned, not only the role of women, but sexuality in general. In addition, Vietnam War protestors were heavily on the scene, and hallucinatory drugs were so commonplace that many later quipped, “If you remember the ‘60s, you weren’t really there.” This time of upheaval and rampant activism that began in the ‘60s and took hold in the ‘70s is well reflected in the works displayed by female artists in this captivating exhibition.

One of the many pivotal reminders of changing stereotypes of female and male roles is illustrated in the ‘Female Sensibility” thematic section of the exhibition where art exposes unspoken stories of domestic violence rather than the veneer of the happy homemaker. These and many other illustrations in this collection remind us how important it is to look back so that we can see how far we have come.

WACK! Art and the Feminist Revolution was organized by the Museum of Contemporary Art in Los Angeles and makes its Canadian premiere at the Vancouver Art Gallery and it will be running until mid-January, 2009. Whether you are male or female, and whether you were born before or after the baby-boomer era, there is much to see and to learn from this comprehensive exhibition.