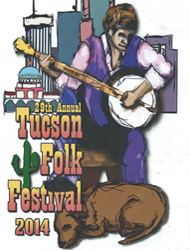 I visited the 29th Annual Tucson Folk Festival last weekend on a steaming hot day, but the heat didn’t keep the crowds away as we made our way downtown to enjoy two days of red hot music at five different venues. The event was well planned and lots of shade – a must in this climate - and commenced at 12 noon on Saturday and 11 am Sunday through last acts (8 or 9 PM) both evenings. More than 140 performing acts were on hand to entertain the public, and several hundred musicians from Southern Arizona and around the country played during the two-day event.

Apart from the great music, there were workshops (Dulcimer, Guitar Maintenance, Ukulele – to name a few), a children's show, a song writing competition, women’s jam and song circle, arts and crafts stalls and lots of good food vendors. Also, a song writing circle, and a Young Artists Stage. I really liked the idea of the young musicians (under 18) getting to show us their potential, and I know that several of these young artists have gone on to perform at other festivals- including one of this year’s headlining groups - Run Boy Run.

The festival stages were in 5 downtown areas (Plaza at Presidio Park, the Old Pima County Courthouse, the Tucson Museum of Art Courtyard and the Patio, and La Cocina Old Town Artisans) and all within walking distance of each other so easy to go back and forth.

The Music - I really enjoyed the Blue Goats – when walking towards their stage (El Presidio Park) I thought of the Kingston Trio…great harmonies. I enjoyed Joel Eliot, the Cowboy Singer from Wyoming, a thrill to hear Whiskey and Honey sing “The Ballad of Louis Riel” and talking about the Metis of Canada in the Courtyard, and roth d’lux (originally from Winnipeg) were great – also at La Cocina (this venue has the wonderful, huge shady tree – thus its popularity). I loved Noctrane (jazzy, bluegrass) in the Museum Courtyard, and, unfortunately, I missed Run Boy Run, a Tucson group whose music I had heard on “A Prairie Home Companion”. They are a blend of bluegrass, folk, bits of classical and jazz influences - rooted in the music of the Appalachian South.

In closing I would say – I have attended many Folk Festivals in North America and this is the first one I have attended that was free. No entry fee for both days. One of the board members I spoke with said.. “It’s music for folk and we can’t charge folk money to enter”… Woody Guthrie would have been proud of their efforts!