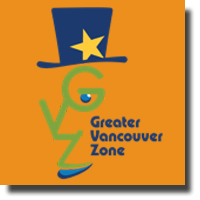 And the winner goes to....FrAcTured! This was the big announcement made by adjudicator Michael Armstrong when he handed the Best Production Award to the Seacoast Theatre Ensemble Company. Receiving the Award was Scott Swan who also received the Best Director Award. The Runner Up Production Award went to Flickering Lights Production's The Last Five Years, a Musical by Jason Robert Brown. Armstrong mentioned that in many situations, the winner is unable to go to Kamloops for the Main Stage competition in July and the runner-up ends up going to represent the Greater Vancouver Zone.

Other than these two, there were two other competitors who won awards: Spectacular Chair Factory's Mighty Qualified, Plenty Smote, Vagabond Players' Goodnight, Desdemona, Good Morning, Juliet which opened the Festival on May 4th, and White Rock Players' Moonlight and Magnolias. Here is the complete award list:

It was an entertaining Gala Night. The evening started off with a buffet, courtesy of Nu-Bon Works; it was then followed by Entertainment with the Jazz stylings of Lorraine Foster and Ron Johnson. Following this was the Comedy Company of Paul Kloegman, Ray Soden, Leigh Richards Stewart, and Dave Turner--their gig was simply hilarious.

In her concluding speech, the very vivacious and funny Val Dearden, Festival Coordinator, thanked the Festival Committee composed of Matt Davenport, Kathleen Kelly-Driscoll, Pat McClean, Iris Gittens, Zoe Davis, Alison Main-Tourneur, Gordon Mantle, Lisa Pavilionis, Namomi Mitchell, Bon Dos Remedios and Rosemary Schuster for their indefatigable contribution to the fest. Dearden in her comedic style, reminding me of Samuel Beckett's Lucky in Waiting for Godot, rattled off a list of things this committee did, from legal contracts to punching tickets.

This was the second Festival I attended. Last year's was held at the White Rock Coast Capital Theatre. I think both Metro and White Rock alternate. I look forward to the next one. Dearden mentioned that although it wasn't financially successful, it still was successful from other vantage points.