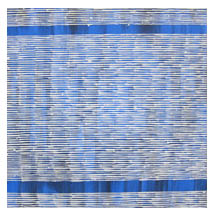 For gallery owner Andrew FitzGerald, this is an exciting opportunity to show case art from Burma’s somewhat hidden art scene.

“This is our third show from Burma and the response has been really good, “says FitzGerald. “All the artists live in Burma so they have their finger on the pulse of what is going on there.”

Burma is a land and people that has been living under the weight of oppressive military government since 1989 when democratically elected leader Aung San Suu Kyi was removed from power and placed under house arrest. Thousands were arrested and imprisoned over the years.

Only recently has the military regime softened its stance and moved toward encouraging signs of democratic reform that is meaningful with strong pressure from the Obama government in the United States.

Although the artists still live and paint under somewhat restricted conditions, they have subtle political messages in their art. According to FitzGerald, “ the artist Than Kyaw Htay has politics embedded in his art. In some paintings, Htay will only show the backs of people for two reasons. First, to allow the audience to feel they are with the subject and to see the stunning landscapes. Secondly, to symbolize that Burma turned its back on the world.”

The paintings are vivid and expressive. Wonder in the Land 2, by Aung, depicts tiered rice fields with bright yellow colors and contours. It is a magnificent work of art.

Many of the paintings poignantly display fieldworkers, farmers and laborers in beautiful outdoor settings. The arduous reality of their work is contrasted by the pristine beauty of nature.

FitzGerald and The East Gallery is an art forum to watch and follow as plans are ongoing to expand shows across Canada and into the United States.

The poet Keats wisely observed that, “A Thing of Beauty is a Joy Forever.” This truth aptly describes the Burmese art work on display in Wonder In The Land.