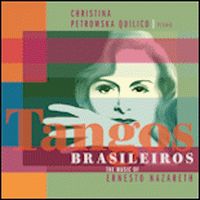 But that's exactly what it was meant to be because Nazareth was a piano player. Ernesto Júlio de Nazareth (1863-1934) was a Brazilian pianist who began composing in the 1870s, nearly two decades before North American ragtime developed. He was ahead of his time already playing ragtime and other music such as foxtrot and did in fact introduce Afro-Brazilian rhythms and mixed them with European musical genres. The result was piano music that reflected offbeat accents.

Likewise, Christina reflects Nazareth's creativity. You hear the first song in the first CD and you say, "Wait a minute. There's something wrong here. The timing is off." Well, that's Nazareth for you, and Christina mirrors his style with these "tangos brasileiros".

That's what makes the Brazilian style of tango different from the Argentinian: it's quicker and has a mixture of different music genres. Christina says: "I feel a particular affinity for the tangos of Ernesto Nazareth, which combine the sensual world of the Argentine tango with the quicker Brazilian dance forms. Nazareth’s music features those hypnotic and mesmerizing tango dreams of a bygone era."

Christina Petrowska Quilico, an internationally known Canadian pianist, plays to the tune of dance. In fact, she says that the only way to feel the rhythm is to dance to the music.