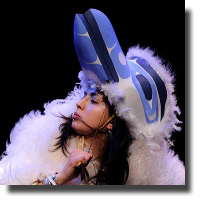 This production combines physical theatre, dance, song and drama, and is described as an "eco-adventure story". The "eco" part deals with taking care of Mother Nature, bringing up again the old tune of save our environment. Like many aboriginal legends, this particular one narrates the story of Nuna (Jonelle Gunderson) who hears things she can't understand, and her grandmother realizes that she has the ability to hear the spirits of rivers and mountains.

Under the artistic direction of Sandra Laronde, this play was written by Tracey Power who was inspired by the story of Jumping Mouse, and it caters to families, especially to children. During the discussion after the one-hour performance, performer Meegwun Fairbrother spoke about the many performances in schools all over the United States and Canada. The group has performed 16 times in the past two weeks, according to him.

In her journey, she meets different animals--the busy mice who symbolize city people whose awareness to nature is limited because all they see are thethings around them. They're busy, busy, busy with their eight to five jobs, and the routine of city life. She meets a frog, a bird that represents the transportation and routine of daily life, and at the end, the spirit of Mista, the great mountain who weeps because of man's treatment of his environment.

The troupe will return to Ontario where it is based, but will continue performing in different communities there as well as Alberta and Saskatchewan.