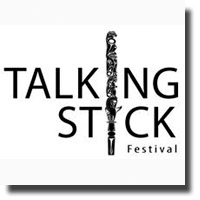 This vibrant festival opened with its gala providing excerpts of the best of Aboriginal artists performing in the 11th festival. The programme opened with The Eagle Song Dancers from the Squamish nation who blessed all of us in the audience with an encantation to remove all negativity. This was followed by Artistic Director and Founder of the Festival, Margo Kane, who also did a little schtick of her own, dressed as a bag lady, and describing the festival comoposed of emerging, diverse and varied performances by local, national and international First Nations artists.

Following Kane's act, Kinnie Starr came onboard with all her compuer equipment and gave a sample of her hip-hop prowess, and got the audience riling and participating in her songs. In one song, "Kiss It", she explains that aborignals aren't as wooden as others think they are. In fact, in her song she sings about making love and kissing all parts of her body

Following this were the Eastern Sky Ambassadors, a group of Iroquois artists, sharing a vision of their culture in story-telling fashion. They relate and account the legend of Niagara Falls and the story of Thunder and Lightning. This was very interesting.

The first part of the gala ended with Metis actor Sheldon Elter doing a one-man show, "Metis Mutt" about how a medicine man cured him of his convulsions and aches. He recounts how he was hospitalized and treated in a normal hospital, with scans and needles and pills, to no avail. But after just meeting briefly with an aboriginal medicine man, who sucked out the evil spirits in the form of sharp rocks in his body he was completely cured. He ended his one-man show with "Wierd, huh?"

All these and more will be shown in the next few days with theatre pieces, live music, dance, slam poetry, storytelling and performance art. For further information visit fullcircle.ca.