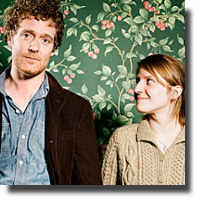 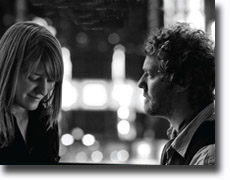 When John Travolta opened the envelope to reveal the winner for Best Original Song at the 2008 Academy Awards (the Oscars), songwriters and musicians Glen Hansard and Markéta Irglová became the unlikeliest recipients of the award in the Academy’s eighty year history.

Glen Hansard, then 38, is a rough n’ ready former Irish busker who left school at 13, Markéta Irglová was half Hansard’s age, born in the Czech Republic, came to Ireland as a young girl and now speaks English with a pronounced Irish accent. The song, Falling Slowly from the low-budget film Once, is a catchy folk-rock ballad that may not have even been nominated in a good year.

But what captured the public’s imagination was the “life-imitates-art” story of the couple’s real life romance that mirrored the movie’s screenplay. The Swell Season, which takes its title from the name of the couple’s band, focuses on the aftermath of the pair’s recognition at the Oscars. But fame can be a cruel mistress. August-Perna’s engaging documentary is almost the bitter-sweet antithesis of Once that is a fictional narrative that plays like a documentary.
Shot in “glorious” black-and-white, the film spans a roughly three year period mostly on the road. Of necessity, it centres rather more on Glen’s story than Markéta’s featuring interview footage of his parents Catherine and James. Actually, James died not long after the interviews.

We watch as Glen and Markéta are driven apart by forces that neither could foresee nor can control when Markéta starts to unravel under the pressure of celebrity and Glen attempts to rise to the level of new expectations. Perhaps the most heart-wrenching moment in the film comes near the end; it features Markéta singing I Have Loved You Wrong. The singer’s rendition was so personal; it gave me a lump in my throat. The film ends with the outright disintegration of the pair’s emotional relationship, each performing as solo artists.

The showing of the film was followed by a live discussion via SkypeTM with film-makers Nick August-Perna and Carlo Mirabella-Davis fielding questions from the audience. One interesting question raised concerned the extent to which the intrusion of the film crew may have contributed to the demise of Glen and Markéta’s relationship. August-Perna responded by saying that filming was probably the least intrusive element that the couple had to endure.

The film was presented in conjunction with the Kay Meek Centre’s ‘Movies at the Meek’ series.