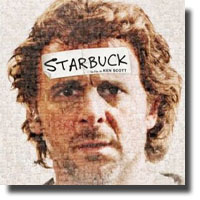 Starbuck is one of the best comedies I’ve have seen in the last few years. This film was produced in Quebec and Canadian movie buffs that see it will be proud of it. This Canadian film is a piece of shear entertainment. Bravo to Ken Scott.

We were greeted at the door of the film screening opening by Alexandra Staseson, who was a warm and informative media hostess (also Producer) and the evening’s MC. There was a wonderful array of great tasting food by One Planet and wine by Road 13 Winery which was a great start for a Canadian film screening. In the theatre there was amazing friendliness in the audience with people exchanging conversations with people next to them and behind them. There was electric anticipation for this film to begin.

The story is about David (Patrick Huard), a meat delivery driver who made an unusual decision. This middle aged man had years ago donated a large amount of his sperm to a sperm bank and his high quality and successful sperm was given to a huge number of women. This large distribution resulted in his fathering 533 children, of which 142 now want to know who their biological father is and force a class action law suit to ensue.

The story-line has a real heart. The humor and script were absolutely refreshing. The dialogue and performance by these actors is believable and seemed so genuine. The dialogue is in French with English subtitles and I believe something would be lost if this film were to be redone in English by a big film company. There was talk of it possibly being remade in English. There is so much more passion when you hear it in French. No, I do not speak French but the subtitles were very legible and funny.

It is important to note that the First Weekend Club has taken the important step to present Canadian films on a monthly basis. The club is non-profit and was started in 2003 by Executive Director - Anita Adam to inspire more Canadians to attend Canadian films.