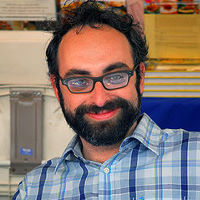 Sunday evening, the 25th Annual Vancouver Jewish Book Festival kicked off at the Jewish Community Centre (JCC). Although a number of pre-festival events have occurred since mid-October, Sunday was the first of 5 consecutive literary-packed days at the JCC.

Shteyngart is a Jewish-Russian-American. He lived the first seven years of his life before his family immigrated to New York in 1979. Wachtel began the evening by asking Shteyngart questions about his early childhood and later the discussion progressed to his writing.

Shteyngart is an incredibly funny man – evident in his literature, and his ability to laugh at himself on stage. He recounted tales of his first novel, written as a child in Russia, where his grandmother paid him a piece of cheese for every page of the novel. Even his tales of moving to New York, tinged with sadness, brought gales of laughter to the stadium. Being a Russian immigrant in the states was not a seamless transition during the Detent era of the Cold War. Shteyngart confessed he pretended he was from Berlin in order to better assimilate with his classmates at Hebrew school, an ironic example that proved if a Russian had to pretend to be German in Hebrew school, things were tough indeed.

Wachtel gently probed Shteyngart about his childhood, his teenage years, and his four-times-weeky visits to his Park Avenue shrink. Shteyngart answered each question fully, giving long glimpses of the immigrant experience and how that has shaped his writing.
Admittedly autobiographical, Shteyngart did not hesitate to admit similarities between him and characters he has created.

Inevitably, the conversation at the end turned towards the current state of literacy and how America is beginning to suffer a loss of literacy. Shteyngart, Wachtel, and the audience, demonstrated a shared concern about the move away from physical books, not just trading in books for e-readers, but trading books in for objects of instant gratification – often found through portable communication devices.

The audience was willingly held captive by an intelligent and thoughtful journalist, and a humorous, brilliant author. Audience questions at the proved that many found the evening intellectually stimulating, and all were enticed and enchanted by both host and guest.

Writers and Company has not yet announced the broadcast date of this interview, but it is expected to air in the next couple of weeks.