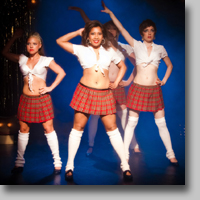 What makes this show unique is the combination of bawdy comedy of burlesque with a full book musical. Unlike the traditional burlesque where each individual dancer would do her thing, this show has not only burlesque dancing but singing and acting too.

Shine Mionne (Cass King) and her troupe of burlesque performers are approached by a producer (Theo Budd) who promises to revitalise the ailing show and offers her tons of money. After a lot of ups and downs, the show finally goes through and saves the Aristocrat theatre from bankruptcy.

The book by Sam Dulmage is not very profound, but, what else can you expect from a burlesque musical? The music and lyrics by John Woods and Cass KIng, however, are pretty good. I enjoyed the songs in the second half of the show, especially "Strictly Business", "Girls Gone Wild" and "Blind".

Most of these actors are Capilano University graduates of Musical Theatre, and are on their way to professional acting. Special mention to the young lovers Frankie (Frankie Cottrell) and Grace (Allison Fligg) for their comedic performance. Another special mention to Danielle Lemon (Lulu Von Doozy) for that traditional burlesque performance as she stripped off her red gown.

This was quite an entertaining show and the audience enjoyed not only the performers but the band that played music of the 50s and 60s. Kudos to the performers and production staff, especially Director Diva Macdonald and choreographer April O'Peel for a delightful show.