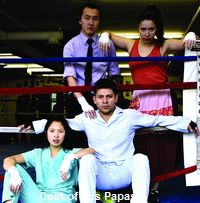 There were nine mainstage theatre productions but I've had the chance to review only three of the plays presented by this Festival: Mis Papas, Kolejka, and Silenced.

Mis Papás is a personal adaptation of the story of playwright-director Pedro Chamale's parents done in quite an innovative style: a 15-round boxing match. We were all seated as though we were watching a boxing bout, and the usher kept on telling the audience as they were walking in, "Sit in the first row. Those are the best seats. All four characters seemed to have gotten boxing lessons because they were boxing with boxers' moves. As you enter the theatre, you already have the main character, Edwin Perez, skipping rope like a professional boxer. Even his wife (Manuela Sosa) was skipping rope and boxing like boxers do.The show is multilingual, Spanish, English and Tagalog (by the Filipina nurse, Anjela Magpantay). It's a mosaic of Canadian immigrants (the doctor, Derek Chan, is Chinese). It's an Everyman's tale of Canadian immigrants whose “happily ever after” lives has a question mark put on it. Good show. There were even a few audience members who stood in ovation during their last performance last May 15th.

Kolejka features puppeteers (Randi Edmundson, Stephanie Elgersma and Jared Rascke) who combine rod and shadow puppetry. Very innovative. You'd think that puppetry is a thing of the past, but it still is alive and kicking. This puppet show is inspired by a board game of the same name, The story behind it is the 1960s and 70s behind the iron curtain where shortages of goods were common, anbd people waited in long lines for everyday items.

Silenced takes place sometime in the future at the basement of the Vancouver Public Library after a cataclysmic event (the big earthquake) and some people have been stuck there for a year. What they do to entertain themselves is do cabaret shows which I found funny. The March 15th audience (almost a full house) enjoyed the tongue-in-cheek comedy of these actors. (Elliot Alexis, Sindy Angel, Jordan Chin, Taran Koootenhayoo, Deneh Cho Thompson, Robert Thomson, Gillian Thomson, Claire Love Wilson, Kieran Wilson. I liked the last scene when all the lights go off and everyone holds a candle and dance to the Colombian tune of "Caderona".

The festival continues till May 22nd. For more info, go to www.revolverfestival.ca