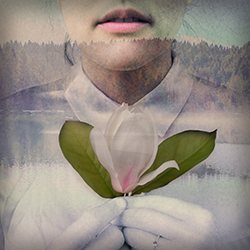 This play is about adult relationships that occur in everyday life. In this particular play, you have four people interacting with each other. A little bit reminiscent of Who's Afraid of Virgina Wolfe? In fact, I think playwrights/directors Jessica Schacht and Sam Young were thinking of this Albee play because the main character is Virginia (Yoshié Bancroft).

There are also four characters who drink, especially Virginia and Bret (Zac Scott), even if it's just beer as opposed to the harder liquor in the Albee play. The difference is one of the relationships is Lesbian (Virignia and Edie (Melissa Oei), and another perspective of the play is the idea of "open relationships" which began during the hippie years.

The acting was good, but I was not too happy about the play and the directing. I would have wanted to see something more concrete instead of digressions into driving and the meaning of time between 4 and 5. I would prefer to see something not too artsy, such as the cross-dialogues where actors all speak at the same time, like the Opera.

The play has to be worked on some more. It has to be more focused, and not confuse the audience with all kinds of artistic paraphernalia that aren't needed. 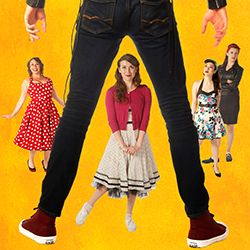 What a terrific show! You'd think you were in Broadway. What energy! Most of the actors are graduates of the Musical Theatre Programme at Capilano University, and boy, could they sing, act and dance! This musical was nominated for a Tony Award and produced by Awkward who was the Pick of the Fringe last year and other years, I think. I've reviewed them a lot of times, and they're getting better each time I see them. It's a huge cast of around 15 and they're accompanied by a live band of four instrumentalists. I won't be surprised if this show will be a Pick of the Fringe again this year. This show will sell out fast, so be sure you get your tix asap. 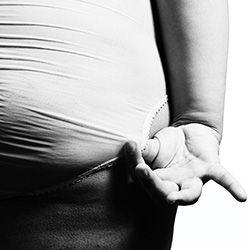 How I Lost One Pound, The Musical

Although Carlberg calls this a musical, it really isn't. She lip syncs a couple of songs and that's about it. But it does talk about losing weight one pound at a time. In this one-woman show, Carlberg talks about her dream ever since she was a child of being a comedian, singer and actor, but through the years, she has been unsuccessful despite all the classes she takes in acting, improv, dance, etc. Then she gets married and has three kids, and again, the dream is on hold. Finally, when all the kids have grown up and left and she's 52, it appears that her dream of being a comic, a singer and wearing a bikini again is about to come true. Her idol, the comic actor Jim Carrey, has a voice over at the end of the show. What do you think he said? That's the climax and I won't spoil it for you. Not a bad show: she gets the audience involved, and gets us laughing and entertained for a whole hour. 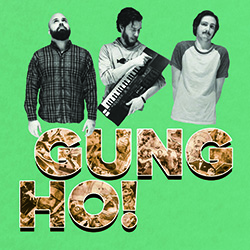 If you want to see a ridiculously stupid show, go and see this one. You have to be in a stupid move, maybe half-drunk, so you can appreciate the stupid jokes. Mind you, these actors are good, but their material is terrible. Perhaps if you're six or seven years old, you can giggle, laugh and have fun. But if you're a normal adult with no mental disability, you'll find this show corny. In fact, one of the characters is called Cornhedge. A reflection of corniness, I suppose.

Sketches like the Snake Pit and The Mannequin are totally out of tune, even politically incorrect. And their last song Hot Dog Merry Christmas was as silly as it could get. Well, this is the fringe, afterall, and it's forgiveable to be amateurish. One word of advice: study skits from the professionals, especially the Americans. They know what comedy is all about. 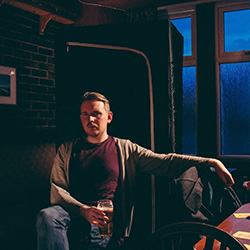 The concept of this one-man show is interesting, but it should be edited. Gilday is known for the "spoken word" and has won awards most probably in poetry slams. And that's where the problem is: he practically uses the entire show doing his poetry slams. Besides, for a one-man show, 30-45 minutes is enough, and not one entire hour. The idea of going through Heaven and Purgatory through a portal that looks like a tent is interesting. As he enters the tent, we see a screen projection of him walking through a street, entering a pub, getting a free beer, and listening to a woman for 12 hours. Purgatory is different. It's Edinborough, and apparently, being a native of Glasgow, he hates Edinborough.

But all in all, I think the concept of presenting the afterlife and the last judgment was quite interesting. We're living in a high tech world with computers, tweets, facebook, blogs, etc. and he manages to put all of this in. I like the ending, nice twist, but you have to see the show. I don't want to be a spoiler. .