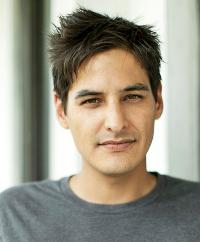 PuSh International Performing Arts Festival
As You Like It

Most of us who regularly attend the theatre, concert hall or pretty much any public gathering in British Columbia are by now accustomed to hearing a 'boiler-plate' acknowledgment that we are gathered on the traditional, ancestral and unceded territory of the Coast Salish peoples, Squamish, Tsleil-Waututh and Musqueam Nations. Both First Nations and Canadians of European origin see this as a merely token gesture.

Cliff Cardinal, son of well-known Canadian actress Tantoo Cardinal, was born on the Pine Ridge Reservation, South Dakota. He is a member of the Lakota-Dene nation and as such, has a legitimate bias with respect to land claims. Cardinal makes a point of disliking the Land Acknowledgment. It doesn't prevent him, however, from presenting the longest and most elaborate version that most people will ever hear.

Cardinal takes the unceded lands announcement and turns it into something that is part stand-up comedy and part rant. It's hard not to agree, at least to some extent with Cardinal's extreme stand. Indigenous people see the acknowledgment as patronizing and even Canadians at large feel it is minimal lip service, while new Canadians must wonder if they're somehow trespassing.

Cardinal handles the controversial subject with broad humour, with the audience greeting his delivery with exuberant laughter. However, when he expands his narrative and challenges the audience to contemplate unnerving issues such as undocumented graves at residential schools, and particularly when demonstrating a mock cringe when referring to the Catholic Church, the audience reaction is closer to a nervous titter.

Cardinal occasionally refers to himself as an "Indian," a term he would justifiably be offended by if used by non-indigenous. He is undoubtedly an intelligent, talented and thought provoking artist. There is, perhaps, an irony not overlooked by the artist that the chosen vehicle for his "radical retelling" is Shakespeare's As You Like It. After all, it centres around brothers who can't get along with one brother being screwed-over by the one in the more powerful position.