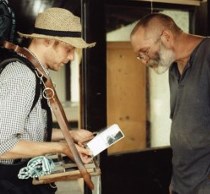 The Cultch and the PuSh Performing Arts Festival
Portraits in Motion

The York Theatre stage is shrouded in black, just before we see a man standing behind an antique table with a spotlight shining on his hands. Volker Gerling then explains to us that he trained as a filmmaker in Germany, but eventually found a different way to use photography, which was to make flipbooks. Unlike the simple ones from our childhood, which usually featured cartoons, like a rocket ship blasting off, Gerling takes his photographs of people and turns them into fleetingly short, but fascinating movies.

Gerling speaks to us directly, like we are his old friends. This must be why the strangers he meets on his once a year walking treks trust him to take their photograph. Once he has won their confidence, he asks permission to take a photo. What the people don’t understand about this request is that Gerling’s Nikon F3 camera takes 36 photos in just 12 seconds. This results in a series of photos that show the person’s initial pose, followed by displays of surprise, disbelief, humour, and an eventual unselfconsciousness that is rarely seen in portraits. In fact, this reminds me very much of the photos I take of my granddaughter who is not quite two years old yet.

The flip books are a joy to watch because they are simple and intimate. Each flipbook gets its own name, such as Old Man with Baseball Cap, Woman on the Rocks, Two Lovers, and Mother and Daughter. The actions can be charming, such as the older man who whips his baseball cap off his head to proudly display his spiky white hair underneath. Or in another flipbook of a German family, the father uses the extra time he wasn’t expecting to bend down and kiss his daughter’s head.

The audience sits expectantly, ready and waiting, as if each of Gerling’s books is a wonderful gift. There is quiet laughter or even the most hushed of sighs. Gerling makes sure to show each flipbook three times to us, except for the very last one. In this way, he believes he is demonstrating “the true face of time” because his flipbooks can be sped up, slowed down, viewed forwards and backwards.

At the end of the show, Gerling invites the audience up onto the small stage, although he cautions us, “Not all at once, of course!” While onstage waiting my turn to look, I watch the enjoyment on other people’s faces as they view the flipbooks. Volker Gerling has created miniature works of art, while also letting us see how much people around the world have in common.