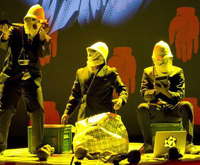 In Italian with English Surtitles

Third World Bunfight, a South African company focusing on post-colonial Africa and historical and contemporary relations between Africa and the West, offers a magnificent Macbeth that is strong, brutal, full of forceful images. Verdis vision of medieval Scotland, a mirror for his contemporary Italy, here becomes a reflection of the cruelty and violence inherent in the unconstrained conflict beween mining companies for the immense wealth of the Democratic Republic of the Congo and the disastrous consequences of corrupt rule and civil war. Indeed, the suffering of the peoples involved almost becomes another character in itself as the struggle by Macbeth and Lady Macbeth to sieze and maintain power is played out against a background of black and white images of hacked and beaten corpses, injured miners, child workers, refugees and other victims of war. Banquo and the Witches lessen in importance and Macduff almost vanishes.

At 100 minutes, this is a dense edition of Macbeth, highly schematic and formal. A raised platform makes a confined acting space between the chorus sitting, whether witches or refugees, like a choir in two rows and the on-stage orchestra opposite. Much of the singing in the first act is done in stand-and-deliver fashion with little movement or interaction between the characters. Hard-hatted and white-masked business-men/witches repeat a pattern of mimed gestures and wounded victims crawl around the perimeter unremarked. In unsettling contrast to the stylized staging and the unchanged Italian words are the clever vernacular surtitles which shove the hum-drum every-day into the otherworld of performance. Verdis "Stupito io n'era per le udite cose" for example becomes the texting shorthand WTF. There are few props, mostly plastic crates.

The costumes are equally arresting and support the overall concept to the nth degree, from Lady Macbeths lepoard print lounge wear and stunning red boots worn at the height of her power to the military camouflage which hides Macbeths true identity. Lady Macbeths red party gloves and other fine details add a more subtle touch. At the end, stripped down to singlet and underpants, Macbeth appears a pitiable figure, exposed and vulnerable, an enormous accomplishment.

Concept aside, the singing was magnificent. The 7-person chorus doubled as witches, messengers, militia-men, assassins, faceless corporate suits and, most notably, refugees, with excellent sense of character and rich volume. Otto Maidi (Banquo) elicited instant sympathy with a warm, resonant line and strong presence. Owen Metsilengs Macbeth was almost indistinguishable from Banquo in his opening scene but grew subtly into a tyrant. If I have any quibbles, it is that his interpretation of the Italian text is so satisfying, he shows no sign of the flippant and coarse Macbeth of the surtitles. The delicacy of his Pietà rispetto amore" was unnervingly moving.

Nobulumko Mngxekeza delivered a superlative Lady Macbeth. A chameleon, she wove her way from laundromat housewife with ambitions through gyrating vamp and celebrity hostess to her vanquished, defeated demise, filling each role with prodigious singing and acting. Verdi famously asked for an ugly voice for Lady Macbeth. Mngxekeza delivered not just the coarse voice of her opening Ambizioso spirto but an atmospheric, lambent La luce langue, a sparkling, elegant coloratura "Si colmi il calice" combined with in-your-face seductive contortions (here there was no disconnect between the text, the surtitles and the portrayal) and a tender, floating sleepwalking scene..

In Fabrizio Cassols arrangement, Verdis central "Patria oppress!" also book-ends the performance, supplanting the overture and the triumphal finale, underlining Brett Baileys focus. Cassols cuts and altered placings produce a concentrated performance piece perfectly matching Baileys direction, but the re-orchestration, excellently played by local musicians led by Premil Petrovic, which includes an African timpani section, both adds African sensibilities to the score and re-interprets it, re-illuminating Verdis music as Baileys direction re-construes Shakespeare. Bailey does more than contextualize Macbeth into the corrupt machinations of the CDR to bring this African disaster into North American consciousness. He also explores the patterns of Risorgimento Italy, Jacobean Britain and medieval Scotland, revealing them to be as close to us today as the evening news.

Finally, to paraphrase another play, If it be true that good wine needs no bush,'tis true that a good play needs no prologue. The frame story that Brett provides adds almost nothing to a production already stuffed with brilliant ideas.