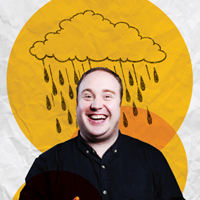 Jonny Donahoe certainly puts a lot of preparation into his show. For about fifteen minutes before it even starts, he is busy distributing to people in the audience slips of paper on which handwritten numbers and sentences appear. Those slips of paper are requests to participate by reading out loud the words on the paper when he calls out the corresponding number.

Every Brilliant Thing is presented in autobiographical form, although, it essentially deals with his mother’s mental health issues that later manifest in himself. The title comes from a list that the storyteller initiated, when at the age of seven he was saddened by the death of his dog, then even more traumatized finding out that his mother had attempted to end her life.

He had the idea of compiling a list of 300-plus reasons why life is worth living and giving it as gift to his mother to get her out of a suicidal funk. As he grew into adulthood he lengthened the list to include everything he considered to be “brilliant about the world” – ultimately reaching one million items.

What starts out as a monologue thereafter includes audience members to portray additional characters: a veterinarian, his father, a school guidance counselor, an English teacher and his girlfriend Sam. For the most part, Donahoe works the show without the benefit of a microphone. While his voice projects adequately, we don’t hear his “assistants” quite so well.

The issue to which Donahoe draws our attention likely has an impact on many of us. As he re-iterates during his show: “If you’ve lived a full life and get to the end of it without getting depressed – you probably haven’t been paying attention.” If this show weren’t so funny it would be downright depressing.