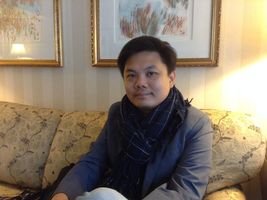 King Palisoc makes his debut as a feature film director with Tandem. He has won a number of awards as a music video filmmaker and worked on several commercials in the Philippines.

After doing a short film, Bang Bang Alley, which had three stories, one of which was a 30-minute episode directed by him, he was then asked by the producers of Tandem to direct this full feature film.

This film has already screened recently at the MIFF (Montreal International Film Festival) and will soon screen at the Cairo InternationalFilm Festival and hopefully, he said, it will be screened in some film festivals in the USA.

Palisoc did a Bachelors degree in Communications at Ateneo University in the Philippines, and afterwards worked on music videos and commercials before doing Tandem. He said that some critics commented that he sided with the Tandem thieves because there was almost an empathy that exuded from the emotional attachment of the Tandem brothers. However, he said, he was just being objective to the fact that this criminal situation exists. In fact, a lot of footage used in the film were from YouTube and news stories about Tandem crimes in Metro Manila.

He hopes he can get publicity from the Filipino community when he goes to the Q & A session today and tomorrow when his film is to be screened at Cinematheque. Just like Michael Red who won Best New Director for his film Rekorder last year, King Palisoc is another emerging film director who will make his mark not only in Philippine Cinema but globally as well.