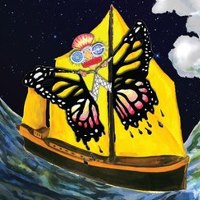 It was with some anticipation that I went to see “Nomadic Tempest,” a multimedia spectacle put on by the Caravan Stage Company from August 15th to September 3rd just east of the south side of the Cambie Street bridge near the Olympic Village. My anticipation derived from it being the first production I was seeing by the hallowed Caravan Stage Company, which has been based in B.C. for 47 years, and that it focused on a topic near and dear to my heart – climate change, the greatest threat facing humans and the other species we share the planet with.

The acrobatics and production values were great, and it was creatively constructed. For instance, the backdrop was a tall ship called the Amara Zee, and four of the main characters were monarch butterflies, speaking respectively Arabic, Spanish, Mandarin, and Hunqeminum (a Coast Salish language), overall I was disappointed. The writing was hackneyed, trite, and completely without nuance. While agree I with the writers that those who perpetuate our current dependence on fossil fuels – two characters here called the “SwallowWarts,” even in the face of the evidence of the harm it is causing, are evil – it is not quite so black and white. It is a form of evil Hannah Arendt would have called “banal.”

For those of you who haven’t seen it, imagine Mel Brooks, in his “Producers” phase, writing a hippie opera on crack, and you get some idea of what the production is like. A Chinese-Canadian six-year-old sitting next to me would occasionally interject comments like “What the heck?” and “People are leaving!” that echoed my sentiments exactly. The only reason I didn’t leave was I wanted to see it all the way through, but it was embarrassingly bad. Which is a shame, because it could have been a powerful vehicle for opening minds (the audience on the night I attended was quite diverse), but I fear it wound up merely preaching to the choir, those who gave it a rousing ovation at the end when many had left.