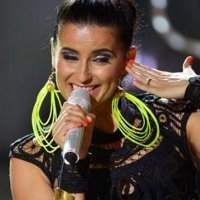 Nelly Furtado may not have gotten the overwhelming reception she expected on that clear January night she played the Commodore Ballroom in Vancouver, but she proved by her stellar show that she is not one to let a slight affect her performance.

Her audience of hard-core fans clearly appreciated her knock-me-down-to-set-me-up-again renditions of such early pop hits as these two off of her Whoa Nelly! album: “I’m Like a Bird” and the mambo-groove-king-crush-me-like-a-wedding-ring crowd-pleaser “Turn off the Light.”

Other songs Nelly performed with precision, and that stunning killer of a vocal range of hers included these from her Loose album: the sensual, seductive tease-me-please-me “Maneater,” the steady as a staccato rainfall melody whose hook is a catch-and-release clutch hold named “Say It Right,” and the bright, crisp, ironically bittersweet rhetorical question of a song in search of a movie, “All Good Things (Come to an End).”

But the real story here is Nelly’s new album. This leg of her Spirit Indestructible Tour may not have been a sell-out, but the devoted fan base Nelly has is clearly on her side, and even when she had to begin one of her new songs again after forgetting the lines partway through the first verse, they were with her in support and grateful for her strong, charismatic presence, her statuesque song styling, with that fall-like-smooth-water-cascading into your ears sing-to-me-like-we’re-partying-like-it’s-forever feel.

This was the perfect intimate venue for Nelly to showcase her techno dance craze numbers, like “Bucket List” and “High Life” and though the band was occasionally so loud they threatened to drown out the liquid dulcet tones of the diva of this fine hour, the beat and the heat of the song did keep our feet flashing about the floor as neon number after neon number was played.

Although it, too, was a crowd pleaser, “Like a Prayer” may not have gotten as big an applause as say “Promiscuous” might have, had Nelly chose to do this one of her own songs instead of ending with a Madonna cover, and besides, it wasn’t really even ‘the midnight hour’ yet before this short concert was over.