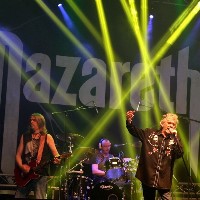 Nazareth with special guests The Headpins

Life on the road is not a “Holiday,” no matter what the first track off of Nazareth’s 1980 Malice in Wonderland album might lead one to believe. Illusions fall hard, and if this year’s Independence Day concert at the Commodore is any indication, there is nothing soft about these veteran Scottish rockers.

Then again, their talent is no mirage, though shadows may also fall hard.

After a lengthy opening session played with heavy metal panache by hometown favourites, Darby Mills and the Headpins, Nazareth took off for “This Flight Tonight” with a sell-out crowd on board, armed with a rowdy attitude and ready to rock a mile high or more (no matter how you squint, that dangling modifier cuts both ways). The trip was not without turbulence.

In its present incarnation, Nazareth has two of its original members—lead singer Dan McCafferty and bassist Pete Agnew—along with Pete’s son Lee on drums, and guitarist Jimmy Murrison on lead. 2013 marks the forty-fifth anniversary of the band’s inception, and the years have left more than just wrinkles in time. The band has been prolific in terms of both recording and touring.

Jimmy Murrison is a capable, if not stellar lead guitarist and although he is easily able to handle the riffs and runs of the Nazareth songbook, his improvisational work proves relatively tame compared with the sizzling stylization of Headpins guitarist Tony Dellacroce. If some among the audience felt the Headpins played too long, there were equally as many if not more who were just getting their groove on when that hour-long set ended all too soon.

What made the Nazareth trip rough at times can perhaps best be symbolized by the hurt, pained look on lead singer Dan McCafferty’s face, which was there for two reasons: first, what he called the ‘cold’ he was fighting (something Pete Agnew later termed “respiratory problems”); and second, the obnoxious audience-member who kept interrupting McCafferty’s lead-in commentaries by yelling “get on with it!” McCafferty did seem pale and drawn throughout the evening. If he lengthened the interludes between songs to recoup his energy, his vocals were nevertheless as vibrant, voluminous and potent as ever.

When I took a moment backstage after the show to ask Pete Agnew how McCafferty manages to deliver such a dynamic show in spite of his evident health issues, Pete said simply, “he’s a trooper.” Deft understatement indeed. Even though at times it appeared that McCafferty “should not have got on this flight tonight,” and despite showing evident signs of wear and tear, he and the rest of Nazareth gave an admirable and memorable performance.

By the time they swept through their encore medley of greatest hits, and the cheering crowd had been regaled with the likes of “Razamanaz,” Shanghai’d in Shanghai, “Woke Up This Morning,” and “Bad Bad Boy,” all that remained was the perennial favourite, that closing power ballad, “Love Hurts.”

This evening’s performance by Nazareth proves that this hard-working Scottish rock band is more than just a shadow of their former self. It is perhaps a mixed blessing that this former self casts such a long shadow. The big question is: How long can Nazareth dance with its own shadow before some new “Light Comes Down”? Will Big Dogz (2011) be followed up by bigger and better things or will Nazareth be forever relegated to the status of a “Garden Party” style rock band that nobody recognizes, because “they didn’t look the same,” even though they played all the old songs.