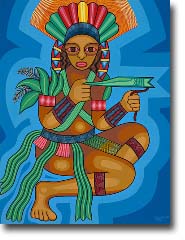 Museum of Anthropology
Paradise Lost? Contemporary Works from the Pacific

Last Wednesday afternoon (August 6), curator Dr. Carol Mayer took media guests on an express tour of Museum of Antropology’s brand new exposition Paradise Lost? A Contemporary Works from the Pacific. The collection of art work has nothing to do with English poet John Milton’s famous verse, but is a display that features artists from the islands of the tropical Pacific Ocean.

At the entrance to the exhibit area one can see exquisitely colourful paintings by Pax Jakupa Jr. Jakupa is a talented young artist from Goroka in the highlands of Papua, New Guinea. He paints only during the daytime in the doorway of this hut because he has no electricity. His painting entitled “Sursah – flute” has been adopted as the show’s poster (see picture above, left).

One of most colourful personalities you would ever expect to meet at an art show is George Nuku. Nuku is a Maori artist who works in stone, bone, wood, polystyrene and Plexiglas. He sports a conspicuous moko (tattoo) distinctively identifying him as a Maori tribesman. The six foot polystyrene cube (photo on the left) is an artistic collaboration between Maori artist George Nuku and Haida artist Cory Douglas. The faces symbolize a supreme creator and the cube itself represents the universe.

One of the most unusual pieces in the exhibition is Ka Awatea: A journey of Life. Auckland sculpturer Te Rongo Kirkwood’s exhibition is a personal exploration of the Maori Cloak form, taking it from a ceremonial garment to a sculptured art object. The trio of works (see top banner) characterize a spiritual journey through the cycle of life.

Exhibit contributor Ralph Regenvanu of Vanuatu, is his country’s Minister of Lands and Resources and formerly the curator of the National Museum of Vanuatu. He was Justice Minister until dismissed early last year. He describes his painting “The Melanesia Project” (see photo on the right) as two paintings on one canvas separated by the red and gold vertical bands. On the left, you see the British Museum and on the right is a ceremonial ground in Vanuatu.

Included in the Paradise Lost exhibition is Shigeyuki Kihara’s Siva in Motion. A moving-image work in which the artist, dressed in a Victorian style mourning gown, performs a Samoan dance called the taualuga. The intricate movements re-tell experiences of the 2009 tsunami which caused nearly two hundred deaths in the Samoas. Ms. Kihara is a native of West Samoa; she acquires her Japanese name from her father.