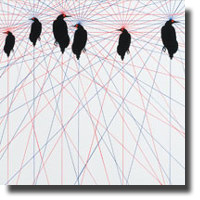 Museum of Anthropology
The Marvellous Real: Art from Mexico, 1926-2011

Dr. Nicola Levell led our tour group to the doorway of the latest MOA exhibit, The Marvellous Real: Art from Mexico, 1926-2011. Dr. Lovell is the curator of this new show, as well as being an assistant professor of anthropology at UBC.

Within minutes of stepping through the door of the gallery, we found ourselves surrounded by a fantastic collection of Mexican artwork gathered over 85 years, including paintings, sculpture, mixed media, photography, and video.

It was the Cuban writer Alejo Carpentier who used the phrase “the marvellous real” to describe the unique viewpoint that saturates the arts and everyday life of Mexico and Latin American countries. The artwork we saw was indeed fanciful, lively, political, and also deeply personal. Well-known Mexican artists such as Frida Kahlo, Juan O’Gorman, David Alfaro Siqueiros, and Rufino Tamayo each present a unique vision of Mexico. The contemporary Mexican artists in this exhibit continue this tradition in very creative ways.

The art in this exhibit is not, however, presented in any chronological order. Instead, the Audain Gallery has been divided into five smaller rooms, each one named for a particular way of thinking: Mythologies, Archaeologies, Ontologies, Technologies, and Ecologies.

In the Mythologies room, Betsabee Romero, a female artist who has used real cars in some of her international art pieces, revisits the ancient Mexican myths by carving the images of plumed serpents into four tractor tires (Serpiente, 2004). Romero does well to use rubber since it was so highly prized by the Aztecs, both in their tribute ceremonies, as well as in their ball games.

In the Archaeologies room, Sandra Cabriada has created an installation of single shoes, each housed in an acrylic box, that add to the overall structure (Calzado de alta resistencia, 2001). Cabriada found these lost shoes as she was walking around the streets of Mexico City during 2001. She documented where and when each shoe was found, right down to the exact hour and minute of the day. But it is the lost shoes themselves that speak most poignantly to the viewer, with their visible imprint of the owner. In fact, one shoe still had a small metal brace attached to it.

All of the pieces in this exhibit are owned by FEMSA, the largest beverage company in Mexico and Latin America. Since this is the first time this collection has been brought to Canada, now is a wonderful opportunity to see it.