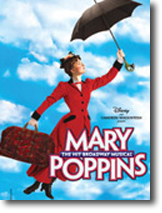 With an Interview with Music Director Daniel Bowling

Nanny’s are often selected on the basis of experience and personality, but it can often take anywhere from three months to a year of careful searching before an ideal fit is found. Unless of course, the nanny is presented by DisneyTM and Cameron MackintoshTM in the hit Broadway musical Mary Poppins. This stellar Broadway Across CanadaTM production features Rachel Wallace in the title role, with Case Dillard as Bert (but Con O’Shea-Creal stood in for Mr. Dillard on opening night, and did an amazing job, I might add).

The Banks family live in a house on Cherry Tree Lane in London. Michael Dean Morgan does an admirable job of playing George Banks as a staid, proper, punctilious Victorian-style father. Elizabeth Broadhurst makes a strong showing as Winifred Banks, and her rich vocals find a voluble outlet with Being Mrs. Banks, one of six new songs written for this play by George Stiles and Anthony Drewe.

These new songs, along with the songs adapted by Stiles and Drewe for this production, are wonderful additions to an already memorable song list for this spectacular play.

The story centers on the two Banks children, Jane (Marissa Ackerman) and Michael (Zach Timson), who are headstrong and temperamental. The children’s misbehaviours are mainly due to the fact that they are largely ignored by their father and shunted off to nanny after nanny by their mother. Michael loves flying kites and astronomy, but George is far too busy with his work at the bank to spend time with his children. He wants a nanny like the one who raised him, disciplined and stern. Mary Poppins has other ideas.

Suddenly Mary Poppins arrives. Rachel Wallace has a wonderfully rich and musical voice, and her opening number Practically Perfect (another new song) puts the children in their place with precision and panache. Ms. Wallace is wholesome and radiant and every bit as ebullient as Julie Andrews ever was in the original movie. One of Poppins’ memorable lines sums up Rachel Wallace’s performance: “It’s not what you say, but how you say it.” Whether she says it or sings it, she shows how it’s done right!

Another excellent vocal talent that this show offers is Ms. Q. Smith who plays two parts with equally spectacular results: Miss Andrews (aka, the Holy Terror), a nanny who acts as a kind of a foil to Mary Poppins; and the Bird Woman who has a wonderfully poignant song.

It is hard to say which the real showstopper of this amazingly excellent performance really is: A Spoonful of Sugar or Practically Perfect or Feed the Birds or Let’s Go Fly a Kite or A Step In Time or Supercalifragilisticexpialidocious? These songs, and all the others, are all delivered with style and formidable skill by the consummate professionals engaged in this first-class production. But Supercalifragilisticexpialidocious did receive the biggest applause.

Enhancing all this considerable singing and musical prowess is the incredible scenic and costume design work of Bob Crowley and associates, the visually stunning lighting design work of Natasha Katz, and the picture perfect choreography of Stephen Mear.

The Banks’ house is also picture perfect from the outside. Then it opens to a full-sized interior, a stage within a stage, like a great doll’s house opening to the world. Finally, when all is said, sung, and done, it just as easily folds up and vanishes within instants with each set change.

Another set piece that has dramatic effects is the bank where George works. It is an Escher-like perspective – a rotunda set over a large clock, surrounded by four Grecian columns, all off at an odd angle veering away from the proscenium to create the optical illusion of formidable power.

Nevertheless, the entertainment value of this wonderful production is no illusion. Like Northbrook (Stephen Roberts) tells young Michael Banks just before the first intermission, “the value is not in the money, it is in how you spend it.” Money spent on Mary Poppins is good value, because it is “practically perfect in every possible way.”

Just as Mary Poppins the character leaves the Banks family better than she found them, so too Mary Poppins the play leaves its audience better for having seen this lavish musical spectacle.

When the Broadway Across CanadaTM touring company arrived in town this week to present Mary Poppins, it brought along one of the most experienced music directors ever to anchor the score of a stage musical from Queen Elizabeth Theatre’s orchestra pit.

Daniel Bowling received his formal training in classical music at the prestigious Curtis Institute of Music in Philadelphia; he then continued his studies at The Julliard School in New York. He spent the next ten years as trumpet player, first, performing with the Mexico City Philharmonic before joining the brass section of the St. Louis Symphony.

He spoke with me by telephone from his hotel room at the Sandman Inn as the touring company of Mary Poppins was about to open in Vancouver for a run of eight performances. I asked him how he compared working unseen in the orchestra pit with performing on stage. “It’s a different kind of pressure,” he replied. “The refined sensitivity of playing in an orchestra and occasionally called upon to step out and play maybe sixteen bars as a soloist is much different to leading a live ensemble and having to steer the whole thing together.”

Like most folks who enjoy musical theatre, I often wonder how many musicians a touring company has on regular payroll. “We travel with five musicians who form the nucleus of the orchestra: three keyboard players, a drummer, and a guitarist,” Daniel explained. “The remaining musicians are hired at forthcoming venues through a local contractor. For Vancouver, we’ll have a total of 16 musicians.”

I asked Daniel what kind of treatment the iconic songs associated with the show will receive. “The arrangements have been done by Bill Brohn who is one of music theatre’s top orchestrators.” He went on to explain that: “The music the audience will hear is an amalgamation of original tunes composed by the Sherman brothers with new songs added by George Stiles (music) and Anthony Drewe (lyrics).”

On a personal note, Daniel made it known that he is married to English contralto Grainne Renihan who played Fantine in Les Misérables in the West End. They have a fourteen-year-old son who attends La Guardia High School of Music & Art in New York City.

I suppose that professional musicians are often asked what kind of music they listen to while driving their car or relaxing at home. Daniel didn’t seem to mind being asked that question again. “I have pretty eclectic taste. I like jazz, classical and rock music and having a teenage son certainly helps keep me up to date with new artists and new trends.”

Throughout a stellar career, Daniel Bowling has worked all over the world, though he did mention that it had been more than twenty years since his last visit to Vancouver. I guess he has a lot of sight-seeing to catch up on in the next six days.