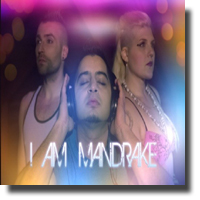 If you're into hard punk rock, Vancouver based production company I AM MANDRAKE presented their first Electro-Vaudville show entitled “Runway Jubilee” at Celebrities Night Club last July 24th. The show was performed to an original soundtrack, also to be released this summer, which showcases the best of I AM MANDRAKE’s musical work since 2010 – including Virgin Radio’s ‘best of BC winner’ “Miss You, Miss You” and new songs such as the title track “Runway Jubilee”.

The show intended to revive vaudeville by pairing circus, drag, and dance with original music that has already found success through commercial radio. The group tried to create a new form of independent pop act challenging established genres by featuring some of the city’s leading drag talent by attempting “burlesque drag” performances.

It was somewhat entertaining, putting a circus atmosphere in this one-hour show. However, despite its commercial success, the kind of music wasn't to my liking. The band has a following, though, from the reaction of some of the members of the audience. The majority, though, especially the older members, didn't quite react as enthusiastically as a few who raved over this group.

I must commend their innovativeness, but I think they should improve on the music that was loud and in my opinion, noisy and disturbing.

The company will perform again at The Backstage Lounge on August 6th at 8pm.