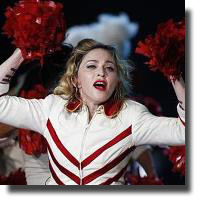 Never mind that iconic flash. Get ready for the pan. Madonna has peaked, and her latest tour offers a rare glimpse at what once was, trying out for what ought never to have been. It does not take long for the gangster rap and guns to appear. The material girl splatters her big screen full of brains and blood with her Gang Bang single enacted on stage, with countless thuggish dancers shot down in a variety of poses, all the while trying to flee or mug the unmuggable Madonna. Every time her trigger is pulled and the big bang echoes through the stadium, the screen is splashed with blood and gore. All this comes hard on the heels of an opening number that has a decidedly medieval monkish tone, mysterious and mystical, complete with a burning ritual and the sudden emergence of demonic creatures with contortionist limbs on raised levels at either end of a gigantic door with a cross emblazoned on it.

I have no idea what the twelve-year old sitting two seats down from me made of it all, but it seems to me to be an odd blend. Incongruous? Sacrilegious? Irreverent? Maybe the “M” in the MDNA stands for mayhem or misdirection or misanthropic. Then came Madonna - Finally!

Madonna likes to keep her fans waiting. She appeared a full hour later than her advertised start time, but in this concert, she treats her audience to many of her more memorable hits such as Vogue, Open Your Heart, Papa Don’t Preach, and Like a Prayer, to name just a few worth waiting for.

This reviewer, however, found it hard to reconcile her wannabe gangster rap numbers with the almost formulaic preaching Madonna engaged in during her only verbal interaction with those die-hard fans in the pit at the epi-center of her triangular stage, whom she canvassed for a taste of international flavour. After noting that some came from Brazil, India, Texas and not surprisingly Vancouver, she waxed eloquent to the crowd about how music brings everyone together despite any differences. Only a slight foray into humour—occurring when Miss Vogue herself admitted that what one wears is really all that matters—saved this banter from the banality of losing itself entirely in trite truism.

One could more easily forgive the blatant self-aggrandizing pandering to a feel-good ‘music is the universal language and love is the key’ attitude if all the gratuitous violence of Gang Bang and the self-serving, hedonistic, indulgence of I’m A Sinner were not so egregiously bookended by the quasi-religious numbers that open and close the show. Madonna puts the ‘hype’ in hypocrisy.

Truth be told though, Madonna has spent so much more than the better part of her career re-inventing herself that she may well have lost touch with whatever true self remains. Her fans would no doubt disagree, pointing to what is likely the most striking giant screen video montage of the concert: Madonna head shots with rapid-fire insertions of different eyes, different heads, different images superimposed and erased again and again to the tune of Nobody Knows Me.

It would be generous to say the Madonna persona is alive with complex contradictions. Perhaps it is closer to the truth to say it is a bandwagon waiting to be gotten on board, and nowhere is that more readily apparent than in the words of the tattoo that the artist formally known as Madonna so notably exhibited just over her publically displayed derriere during last night’s show: Free Pussy Riot. Maybe Russia is the next flash in the panegyric that is MDNA. Then again, maybe the material girl is a mentor. But where is the shock value in that? Besides, Madonna has always been just as much of an adjective as a verb, in both traditional and popular senses of that noun. A fact Ms. Ciccone knows all too well.