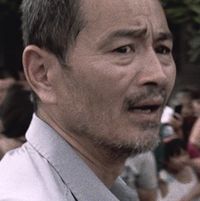 Vancouver-based Chinese-Canadian filmmaker Johnny Ma was recently the recipient of the Best Canadian First Feature award at TIFF this year with this drama/thriller exposing the indifference in today's society regarding the "hit and run" happenings not only in China but all over the world. Lao Shi ( Chen Gang) is a taxi driver who inadvertently strikes a motorcyclist; and being the good Samaritan that he is, rushes the victim to the hospital, saving his life. But this act of moral integrity makes him liable for the medical bills of the comatose patient. An almost Kafkaesque situation or Albert Camus's existential absurdity is reflected here, as though saying we need to be indifferent to helping others, ie, that being a good Samaritan these days is wrong. This is an excellent film by Johnny Ma who studied Film at Columbia University and whom I interviewed recently..

Here is the interview:

I assume the title Old Stone is the literal translation of the name of the protagonist? Is there also a symbolic meaning to it, ie, meaning traditional, old school, etc.?

The film’s Chinese title is Lao Shi, which is the literal translation of “Old Stone”. However, in Chinese Lao Shi also has a double meaning and it’s what you call someone in a derogatory way of being too honest or too naive. For me this is the lens which I would like the audience to see our character through, perhaps in this bias way.

You were in the fashion business before going into filmmaking? Why the change in careers?

I think I always was fascinated by films and theatre. I had even try to audition for theatre school in University. But like many children of Asian immigration parents, I was pursued to study something more practical with my time in school. But I had always meant to change my career perhaps later in my mid 30’s (which I am now) once I am more stable with income and such. I since realized that one of the most difficult things to do in one’s life is to change it, and something really drastic have to happen from maybe even an external force to push you to make this change. Let’s just say, without getting into too personal of a detail, something happened that flipped my life upside down when I was in my mid 20’s that made me rethink my path in life, and the decision was to change it. As hard as that “incident” was, it is the reason I’m here today doing what I love, and not battling a mid 30’s crisis of debating whether to get out of the comforts of life or not…

Was this film inspired from true events? If so, what inspired you?

Yes, basically the last scene of the film was literally ripped out of a headline. This was something that happened in Taiwan or Vietnam, and a truck driver had run over a farmer in the middle of the mountains, and when he saw that no one was around, he decided to back up and kill the farmer. Once the police interrogated him, the truck driver admitted to his crimes and explained that it would’ve been worse for him if the farmer had stayed alive. When I read this, I was shocked, not because of what he said, but because I had understood why he did what he did, practically… And that really scared me to the core, in terms of, I could imagine myself perhaps doing the exact same action if I was somehow presented with the same lot in life and the same situation. I knew then and there that this was a film worth making.

What are your future plans? Any film projects lined up?

I am working on two projects at the moment in China, one about marriage and happiness in the modern time of Beijing with pollution overwhelming the city, and the other about a boss of a Sichuan travelling opera troupe trying to keep her theatre from being demolished. I hope to have one of them shot by end of next year.