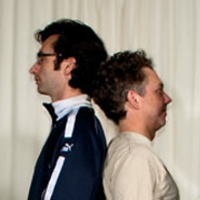 The Life Game with Colleen Wheeler created by Keith Johnstone

Welcome to the life game, where everything is made up and the points don’t matter!

Except, the improvisation is loosely based on happenings throughout the nightly guests actual life...and there are no points (there are, however, bells and horns). Instead of the typical riotous, laugh a minute style of improvisational theatre that most people have come to expect at an “improv night”, the audience is treated to a unique evening of visual and verbal dialogue between themselves, the actors and the guest.

The name of the game, in The Life Game is intimacy… and thought to accomplishing this is evident in many aspects of the evening. Prior to the performance, as well as during intermission and at the end, the audience is invited to mingle on stage, hopefully encouraged by the complimentary food served and the reasonably priced drinks available. Both the food table and the drinks table are conveniently located to ensure that you must immerse yourself in the stage setting to access them… creating a couple of social “hubs” sprinkled around the set.

Also of note is that friends of the guest, if present, are seated in the audience… and conversation between them and the guest is in no way discouraged. This potential dialogue from within the audience seating area, during the performance, has the ability to irrevocably change the typical audience experience.

The cast and crew attempt to capitalize on every detail provided by the guest, in order to faithfully replicate any moment in time. Some memories are insignificant but touching, others grand and raucous… while others may leave a tear in your eye.

The guest for the night was Colleen Wheeler, a Vancouver based actress. The balance between the cast and the guest is important. Happily, Ms. Wheeler and the ensemble worked very well together. In-between the laughter and the tears, it was obvious that the evening was as cathartic for her as it was entertaining for us. Of course, the next performance will have a different guest; anyone attending can’t help but experience an entirely different show, in every which way (save but a few things).

Of special note, the life game is looking to have at least one future guest that is a past member of the audience (random draw, details at the show). Who knows? The next story told could be yours…