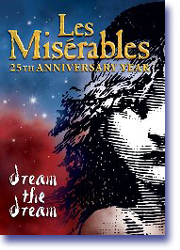 Les Misérables plus an interview with Geneviève Leclerc

Cameron Mackintosh’s incredibly affecting stage adaptation of Victor Hugo's classic novel Les Miserables brilliantly interprets the power of forgiveness and the destructive force of self-loathing. This multi-layered adaptation is firmly focused on the conflict between the heroic Jean Valjean, who through the story, is transformed from a fugitive to compassionate father figure and the unrelenting Inspector Javert, who is obsessed with hunting him down.

Peter Lockyer (Valjean) and Andrew Varela (Javert) are captivating as the central characters. Both possess an expansive vocal range and commanding stage presence. The vivid contrast between these two performances made this musical theatre piece an absorbing morality play. This 25th anniversary production of Les Miserables is a sung-through, three-hour epic that comes to Vancouver with immensely improved production quality over previous ventures. In particular, Matt Kinley’s fabulous set design is inspired by Victor Hugo’s original paintings. Giant rolling props, augmented by dynamic projections glide seamlessly across the stage.

Westbrook, Connecticut native Peter Lockyer is an experienced actor and singer, who has worked extensively in Toronto, brings impassioned nuance to his soliloquy number “Who am I?” as he struggles with his moral dilemma. Similarly, Andrew Varela, who plays the complex policeman handles his own second act soliloquy “Who is this man?“ with no less authority.

Les Miserables has many instantly recognisable show-stopping tunes, not all performed by leading performers. “At the end of the Day” sung by the factory workers and “Lovely Ladies” by the company set a vibrant musical cadence that continues throughout the show. And just when the show is guilty of being a little gloomy, we get the despicably comical Thénardiers (Shawna Hamic and Timothy Gulan) delivering a boisterous “Master of the House” along with their motley collection of customers – everyone has fun at the Thénardier’s inn.

Briana Carlson-Goodman as the ill-fated Eponine and Geneviève Leclerc, who took over the role of Fantine from Betsy Morgan on this tour, both turn in spirited performances. Ms. Leclerc, who, due to the storyline, departs from the stage all too soon, delivers a heart-rending rendition of her signature song “I Dreamed a Dream.” Ms. Carlson-Goodman gives a confident moxie interpretation of one of the show’s best songs, “On my Own” as she laments on her unrequited love of Marius.

Young Gaten Matarazzo, who shares the role of Gavroche with Julian Silva, steals every scene he is in as the cocky little narrator. Erin Cearlock and Ava Della Pietra, who alternate between the roles of the younger versions of Cossette and Eponine display movement and stage craft well beyond their age.

With its background context of social injustice and mass disillusionment, Les Miserables may speak more to our current politically harried times than it did in the eighties.

If you never got around to reading Hugo’s weighty novel, don't worry! Just go, relax in your seat and let the show warm your heart.

An Interview with Geneviève Leclerc (Fantine)

When Boublil & Schönberg’s stage musical adaptation of Victor Hugo’s celebrated novel first hit the boards in 1985, it raised the bar for the entire musical theatre genre. The 25th anniversary production has promised to be “a dazzlingly re-imagined version” of the legendary musical.

When Vancouver audiences take their seats for this new staging of Les Misérables, they will almost certainly focus their attention on Fantine as performed by auburn-haired soprano Geneviève Leclerc as she sings the first act show-stopper “I Dreamed a Dream.”

I spoke with Geneviève recently by telephone at her hotel where she is currently on tour in Sacramento, California. Originally from Gatineau, Quebec, she seemed genuinely grateful for the opportunity to be making her American/Canadian stage debut in what is legitimately regarded as the longest running musical in the world.

I asked her if she was looking forward to bringing the show to Vancouver. “Oh yes, for me, Vancouver and Montreal are the best places in Canada.” She continued “I’ve been to Vancouver many times before when I traveled on the cruise ships. I worked for six years as a singer on both Princess and Royal Caribbean Cruise Lines.”

When asked about what inspired her career choice, Geneviève stated that she had hardly considered anything else. “I performed in high school productions, then, when I graduated I went to stay with an aunt in Montreal and enrolled at the École Supérieure de Théâtre Musical – it just seemed like the right thing for me to do.”

When taking ‘coals to Newcastle’ you have to be good. Producers in the US will always prefer to hire an American than take a chance with an unknown Canadian. Geneviève has already found that to improve her chances of getting the right roles, she had to learn audition techniques. “ You have to go up against so many talented artists down there that you have to be able to stand out,” she disclosed. “I always make sure to maintain my integrity though. I would rather make a friend than an enemy,” she continued.

Like any young Quebecer, she likes to have fun when she is not working. While the tour was performing in Sacramento, she visited the Napa Valley wine region. But she also has a serious side. “I enjoy reading books that help to improve my professional life and my personal life. I have read this inspirational book called The Four Agreements** that makes the point about always doing your best and not taking anything personally,” she enthused.

Geneviève Leclerc will remain with Les Miserables until it returns to the Imperial Theatre in New York City next March. After that, it will be back on the auditions circuit where she will be hoping to land a role in Next to Normal or Miss Saigon.

I have a feeling that Ms. Leclerc will be back in the Pacific North-West again soon; perhaps even in her dream role of Elphaba in Wicked.

**The actual title - The Four Agreements: A Practical Guide to Personal Freedom by Don Miguel Ruiz