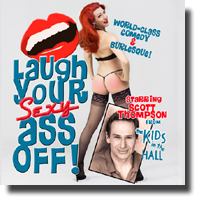 The project was designed by co-creators Doug Thoms (The Purrfessor) who acted as emcee of the show and Kirsten Hogan (Burgundy Brixx) of Kitty Nights Burlesque fame as a modern-day re-imagining of the classic burlesque shows on the 1930's and '40's. The show delivered a diverse selection of tongue-in-cheek performances that entertain with humour and sensuality.

Like the burlesque shows of yore, it wasn't all stripping to the pasties and panties. There were other performances, and the main attraction was stand-up comic Scott Thompson who got the audience laughing all throughout. The other performers were the Wet Spots (Cass King and John Woods) who sang sexy but elegant songs. I enjoyed the part when King said "Raise your left hand. Now, grab the crotch of the person on your left." The lady on my right looked at me and we laughed.

Watermelon was another funny comic as she talked about how she got caught by the police a number of times for selling contraband goods in Wreck Beach. April O'Peele is a Vancouver favourite. In the first part, she came out dressed as a hen with a big white balloon (her egg) which burst and scattered feathers at the end of her act. And in the second part, she was dressed as Marcel Marceau miming as she swam into the insides of a woman.

Cherry Ontop was vivacious, and Sparkle Plenty sparkled in her burlesque act. The duo Just Call Her Heather and Villainy loveless did a hip-hop version of their "tight" boxes. And of course, for the finale, the highlight of the show-- Burgundy Brixx who reminded me of how burlesque was in the good ol' days.

Doug Thoms (The Purrfessor) did an excellent job as the emcee, picking on audience members sitting in the front row. The audience enjoyed his rapport with them.

I'm happy to see Burlesque done the way they were done, in vaudeville fashion, where a variety of not only burlesque dancers, but stand-up comics and singers participate in the show. The event lasted almost three hours, but the audience came out feeling it was worth the money they paid to see this show.