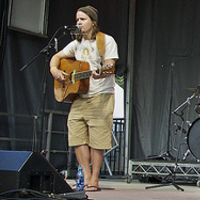 The Jon and Roy Holiday Special

By just after eight on this winter solstice evening, the capacity crowd who were just beginning to assemble at the Vogue Theatre for the Jon and Roy Holiday Special made themselves comfortable in time to hear the rich melodic strains of Wake Owl, the first of four acts opening for Jon and Roy.

With their innovative violin, polished rhythm guitar and an on-time-not-quite-so-sublime fake it-bake it bass, Wake Owl seemed to be the least polished of the four openers. Yet they still received a warm reception from the mostly twenty to thirty-something audience.

Next up: a little slice of heaven named Frazey Ford, a smooth performer who blends acoustic artistry with vocals that pour forth liquid honey. Ford’s soulful live renditions of songs like “Bird of Paradise” and “Gospel Song” are well and away superior to her nonetheless impressive YouTube performances. First she takes her audience with her into the “beautiful clouds [she’s] been sailing through” and then she explodes stardust myths with her “Firecracker.”


Just when we thought we’d died and gone to heaven, a ‘crazy little thing’ called Kim Churchill kicked it up a notch. Churchill tells me his formative influences include a certain Led Zeppelin Page, and it is not hard to see echoes of Jimmy’s intensity in this young man’s performance. Killer speed on the guitar, strong vocals, techno-electro synth-savvy sounds, and some raucous harmonica work made Kim Churchill one of the most crowd-pleasing acts of the four openers.

Finally, just before the headliners brought the audience to their feet, the voluble Vince Vaccaro appeared on stage bringing his unique brand of acoustic finesse and lyricism. He soon had the audience in his hand, either singing along to his choruses or swept away in silent reverie amid the tonal tapestry of his melodic “Silence in the Trees.”

From the look of the way this festive audience mobbed the stage as the headliners took it near 10pm, Jon and Roy have a cult-like following. Catchy hooks and crescendo riffs blend with a drumbeat dynamism as this Victoria-based band suffuses folksy naturalism with vintage Indy reserve.

Highlights of a long set that was full of excellent tunes included “Let It Go”, “Any Day Now”, and “To the Beach.” At one point, the audience laughed when one joker kidding Jon about his repetitive lyrics yelled out, “Play the same song again.”

One good reprise doesn’t necessarily deserve another reprisal, but although we were not on hand for last year’s inaugural Jon and Roy Holiday Special, we are unlikely to miss another.