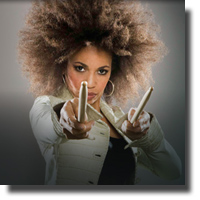 Spectrum Road, originally named the Tony Williams Lifetime Tribute Band in homage to the innovative percussionist who died in 1997, is essentially a personal project of Wiiliams’ most celebrated protégé Cindy Blackman-Santana. Williams is likely better known for his work as Miles Davis’s side drummer than for his more creative solo jazz-rock-fusion exploits. Blackman-Santana (her last comes out of her marriage to Carlos Santana) and her group of all star musicians aim to fix that. Most of the tunes that the quartet played on the Vogue stage last night were either composed by Williams or closely associated with him.

Jack Bruce, a pioneer of psychedelic rock and one third of the legendary British band Cream, is the only one of this august foursome that has actually played alongside Williams. Now in his late sixties, he not only supplies what finesse is offered with his astonishing bass riffs, but can still prove that he has one of the best blues voices in the business.

Rounding out the quartet are John Medeski, a veteran of the New York nineties jazz scene known principally as the organist with Medeski Martin & Wood and Vernon Reid, arguably the least well known, on guitar.

No one in the band cared to impart the tune’s titles to the audience, but Williams' hypnotic coronach There Comes a Time was unmistakable; the song’s poignant lyrics were tempered by Bruce's soulful vocals. Bruce also supplied vocals in An T-Eilean Muileach’s (The Isle of Mull) Gaelic lyrics.

The showpiece of the evening was the epic Where. A full twelve minutes in length, it featured the totally mesmerizing and extremely watchable Ms Blackman providing rock-steady tempo, while Medeski stamped out repetitive motifs on the keyboards, Bruce handled sublime bass lines and Reid delivered some intense guitar work that was sometimes on the periphery and sometimes at the core.