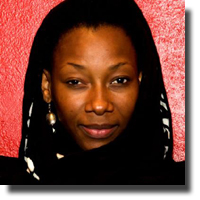 Hailed as World Music’s new princess, Fatoumata Diawara (a.k.a. Fatou) was born in Côte d'Ivoire to Malian parents. She now lives in Paris with her Italian husband and although considered to be a true cosmopolitan, she regards herself as a Malian artist. Her music is steeped in the traditions of Wassoulou and Southern Mali, which to the occasional listener has a similar infectious syncopated rhythm as reggae.

In her pre-show introduction, Fiona Black referred to the current political crisis in Mali and Fatou’s personal response in bringing together some of Mali’s best musicians to record a protest song.

Speaking almost entirely in French and singing in the Bambara language, it’s clear she embraces feminist social conscience and challenges the cultural prejudice women face in Africa and makes these themes part of her music.

Looking strikingly elegant as she followed her back up musicians onto the stage attired in an ankle length orange and brown print skirt, matching bodice top, short black jacket and a red and white turban. Ten minutes into the show, shoes and jacket are removed followed by the turban that revealed tightly braided hair that swirled around her head when dancing - she was totally mesmerizing.

With almost nonchalant melodic charm, she breaks into the affecting Kanou initially accompanied by only her own guitar, then eventually joined by electric guitars and percussion. Sowa is an hypnotic psalm to the children who must grow up without knowing their parents. On Bissa, Fatou flaunts the sensuous timbre of her voice as Greg Emonet displays his prowess on guitar. The song has become a huge favourite in Europe. Perhaps the most politically urgent is the anti-war song Kèlè which the singer proclaims is “pour tous les enfants.”

Ms. Diawara is certainly a spellbinder, as evidenced by the fifty or so audience members that followed her dancing in front of the stage at the end of the concert.