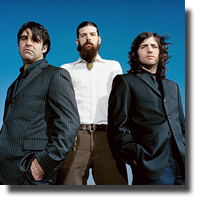 It would seem that the Avett (pron. Aye-vette) Brothers can boast a large number of devoted fans in whichever city they perform. After all, their grassroots success story is legendary. It took until half way through their second number for many in the concert hall audience to think that they were in an arena and leave their seats to rush the stage. It meant that just about everyone else had to stand up if they wanted to see what was going on.

To be fair, it was always going to be one of those shows. The Avett Brothers are hardly renowned for insisting on restraint from their audiences. However, the abandonment of reserved seating also meant the suspension of festival rules like sneaking unauthorised photographs and recording videos.

That said, real brothers from North Carolina Scott and Seth Avett, their long-time bassist Bob Crawford, laid-back drummer Jacob Edwards, and their dynamic cellist Joe Kwon who carries his cello around the stage in one hand, playing with the other, left nothing of their energy behind on the stage.

They hit the stage feet first with Talk on Indolence; a bouncy beginning that might have even got the fans at the Nickelback concert down the road at the Rogers Arena tapping their feet. The Avett boys combined bluegrass, country, punk, good old rock n’ roll and even a little ragtime in a 90-minute-plus-encore gig on a stage that normally would offer up symphony concerts.

Neither of the Avetts bothered much about announcing song titles. It probably would have been redundant. Most of the sold-out crowd at the Orpheum not only knew all the titles, but most of the lyrics as well.

From a personal standpoint, I preferred the “unplugged” part of the show with just Scott and Seth on stage singing two-part harmonies with the (comparatively) mellow 10,000 Words, Bella Donna and Murder in the City.

The band ended their regular set with the title track from their latest recording, (three words that became hard to say) I and Love and You. After several minutes of hand-clapping, foot-stomping and noisy whistling, only Scott and Seth Avett returned to the stage for a generous encore that included Shady Grove and At the Beach.

If this band ever comes back to Vancouver – and I hope they do – they should be booked at the Rogers Arena, where they belong.

Portland band Y La Bamba got the good-humoured audience in an even better mood with a selection of Indie folk tunes. Mexican-American lead singer Luz Elena Mendoza kicked off their 45-minute set with Simba, a lilting duet with David Kyle. The pair was then joined on stage by the rest of the six-piece band with the oddly titled Fasting in San Francisco, the breezy Squawk and the haunting Benito Feliciano sung in Spanish. Ms Mendoza has a fractured, ethereal voice similar to Regina Spektor which can be pleasant to listen to when she stays within her limited range. I had to wonder if the band had been given enough time for a proper sound check. If not, it was a pity. Mendoza’s lyrics were almost indiscernible.