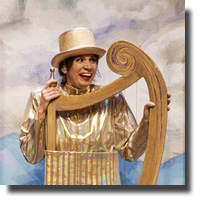 The Cultch in association with Theatre Replacement
Jack and the Beanstalk: An East Van Panto words by Charles Demers, music by Veda Hille

Just about a month after its 100th birthday, the York Theatre on Commercial Drive re-opened its doors to Vancouver’s vigorous theatre-going public. The ‘old girl’ had been sitting idle since closing for the last time ten years ago operating as the Raja Theatre featuring Bollywood films.

The York missed appointments with the wrecking ball at least twice. But eventually, thanks to the efforts of the Save the York Society, the building was granted historical site status and a multi-million dollar face-lift was under way.

A British style pantomime seems like a curious choice for such a meaningful event. But to Redfern it makes a lot of sense. After all it is the Christmas season, a time when folks will take to the theatre as a family outing. Also, pantomime, more than most mediums are renowned for combining topical humour with local reference.

Essential components for any successful panto are: slapstick comedy, offbeat gender-crossing actors, a story loosely based on a good old faerie tale and exuberant participation by a lot of noisy children in the audience. This ludicrous version of Jack and the Beanstalk adapted to consociate with the East Vancouver community has all these aspects, plus a couple of original songs and a collection of parodies from an on-stage orchestra. Actually, there is only one musician, but that one is Veda Hille.

Allan Zinyk gets credit (or blame) for much of the wacky slapstick as Jack’s mother and the hockey stick wielding giant. Raugi Yu, Dawn Petten and Patti Allan are absurdly camp in their various roles. Petten is particularly madcap, caterwauling pop song parodies on the harp. Maiko Bae Yamamoto is affably whimsical as the beanstalk-climbing hero (well okay, heroine).

The York has excellent acoustics and comfortable seating for up to 370 patrons. The plan is to use it as a community space, as well as future Cultch productions.