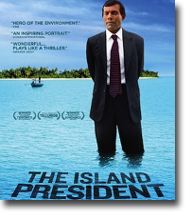 A review by Karen Fitzgibbon

This is a film that should be shown over and over and over again. First as a common man Mohaned Nasheed of the Maldives endures prison and torture in order to free his people from dictator, Maumoon Gayoom. Then Nasheed became president and tries to free his Islands from destruction due to carbon dioxide emissions. There are areas of his Islands that have lost more than 300 feet of shore line. Nasheed is a man of action, courage, determination and vision.

The beauty of these islands is moving. This is where the elite of the elite vacation in the paradise of paradises. Yachts, turquoise waters, and schools of beautiful fish fill the screen.

We are talking about the 2009 Copenhagen Climate Summit brought about by this man fighting to save his Islands. I was impressed with this film, and humorous dialogue especially when Nasheed mentions that Canada has chosen to stay in the background. This definitely received oh’s and awe’s from the audience.

Resident Nasheed used exaggeration to get his point across. We see Nasheed having a meeting at the bottom of the ocean sitting at desks in skin diving gear. There is also a shot of him being interviewed behind his desk wearing his business suit and standing in water above his knees. He is of course totally soaked.

Sadly as the film was ending there was a statement on the screen that revealed that the emissions have actually increased since this meeting. How sad this is. Maybe it is time to take it out of government hands and plead for salvation from the companies who are actually creating the carbon emission. The owners must breath the same air that they pollute. We all have to open our eyes and dare to change our future.

A review by Don Alexander

The Island President by Jon Shenk is a remarkable film about a remarkable man. Shot over the period of approximately a year to a year and a half, and interspersed with archival footage and stills, it chronicles the evolution of Mohamed (Nanni) Nasheed from young pro-democracy activist to president of one of the world’s smallest nations, The Maldives (population 33,000).

For thirty years, the Maldives – a string of islands in the Indian Ocean – was ruled by dictator Maumoon Abdul Gayoom. Dissidents were thrown in jail and often tortured. Nasheed himself spent eighteen months in solitary confinement and was tortured twice. Finally, after the devastation of the 2004 tsunami and increasing pressure from foreign countries, Gayoom was forced to call free elections in 2009 and was finally ousted from power. Nasheed became the new president. However, it immediately became clear he would be forced to reassess his priorities. Whereas for many nations the effects of climate change are a somewhat distant theoretical prospect, for the Maldives climate change is a clear and present danger right now. This is reinforced by the many scenes of eroding beaches and waves crashing over breakwalls, and by the saltwater intrusion that is threatening the freshwater supplies on some of the islands.

Faced with this urgent reality, Nasheed and his cabinet undertook a two-fold campaign. On the domestic front, they made a pledge to become the first carbon-neutral nation in the world by 2019. On the global front, they sought to intervene in every international forum where climate change was being or might be discussed and to make a nuisance of themselves. With Nasheed as their front man, who excelled at being “in your face” in a cheerful and upbeat way, they badgered the world’s nations great and small saying that inaction on climate change was in essence a death sentence for their island nation. And they learned how to work the media: holding cabinet meetings underwater (in scuba suits), giving press conferences with Nasheed up to his knees in ocean surf, and getting interviews wherever they could.

A major part of the film focuses on the lead-up to and behind-the-scenes political maneuvering at the Copenhagen talks on climate change, and on the role played by the Chinese in particular in seeking to block an agreement. Nasheed had wanted a document that emphasized capping warming to one and a half degrees above present, and reducing CO2 parts per million in the atmosphere to 350 from 387. What he got was a weak-kneed accord that “called for” reductions by all nations, but did not require them. Nonetheless, Nasheed and his colleagues will go on fighting for their nation’s survival. Thanks to DOXA for bringing this film to Greater Vancouver.