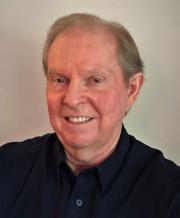 An interview with Tom Locke
Author of Moments in Time

Tom Locke has a Master’s Degree in Mathematics and is an MBA graduate of York University in Toronto. He focuses much of his time on human capital development, strategic planning and executive training. He is also a founding member of the Motion Picture Production Industry Association of BC

RMP What triggered your lifelong musical interest?
TL I grew up in the fifties, the son of young parents who always had the radio on. Hence, I guess you could say that I was weaned on the music from this era. In fact, on the day I was born, the number one record on the charts was “Music! Music! Music!”by Teresa Brewer. However, what really got me to focus on music initially as a hobby was my grandfather. In the early 70s, he was in decline and could no longertinker around the house or change the oil and sparkplugs in his car. On the sports front, he gave up on the Toronto Maple Leafs who were also in decline and he didn’t do much reading. In short, he had nothing to focus his attention on. I realized then and there that I needed hobby/interest that was not dependent on my mobility.

RMP What is your personal favorite music concert attended live?
TL The year was 1973. The place was Maple Leaf Gardens in Toronto. Rock & Roll was going through a revival. On the bill were The Crystals (“He’s A Rebel”), Roy Orbison (in a white suit!), Bill Haley & His Comets, Dion & The Belmonts (my favourite Doo Wop group of all time), and Chubby Checker doing the Twist, the Pony, and the Hucklebuck with clogs on! Everyone was at the top of their game that night.

RMP Cite 3 musicians that have the most impact on you
TL First and foremost was Jackie Wilson. He was known as Mr. Excitement and if you ever saw him on stage, you would know why. He was one of Elvis’ favourite performers. The next one that comes readily to mind is the late, great Bobby Darin. He was extremely versatile. He could sing pop and swing like Frank Sinatra, he could do Rock & Roll (“Queen Of The Hop”), he was successful doing country, sounding much like Marty Robbins (“Eighteen Yellow Roses”) and he even had a folk hit with “If I Were A Carpenter.” Last but not least was the “General” Norman Johnson, a singer/songwriter who scored big with the Rock & Roll anthem “It Will Stand” while fronting The Showmen. He subsequently went on to form and lead the Chairmen Of The Board and had a number of big hits, including “Give Me Just A Little More Time.” All three have passed on but their contributions to the music scene will never be forgotten.

RMP As an entertainment professional, how has the music industry changed over the past generation?
TL There are two significant changes that I have seen. In the formative years of Rock & Roll, you toured to promote and sell your records. Today you put out music with the hopes of getting recognized and subsequently going on tour as that is where the money is. Secondly, thanks to social media you can create your own excitement and following for your music. However, two things remains the same – you must have good material and the talent to get noticed.

RMP How are readers reacting to your new Book. Amazon ratings?
TL My book went live on Amazon worldwide on November 11 last year and has garnered numerous 5 STAR reviews with a number to follow. What the readers like about the book is the fact that it is about the music they grew up with – music that put a smile on their face and became a part of who they are. Secondly, they like how each story is only two pages and written in a way ala the uncovering of a mystery. The third and most unique thing about the book that has received mass appeal is that it is interactive – at the bottom of each two page story there is a QR code that provides a link to the song featured in the story – instant gratification. There is no music book in the marketplace today like it.

RMP What was surprising about making the book?
TL The surprise about making this book was the support and encouragement of my friends, colleagues, and listeners of my weekly online radio spots on Treasure Island Oldies that I have been doing for 20+ years. Subsequently, the journey in promoting and marketing my book has been both fascinating and gratifying. During my journey I have been able to hook up and interview a number of artists who I have talked about in my book – an example of this is my phone call and conversation, during a live on-air interview, with Little Peggy March who was the youngest female singer ever to have a #1 hit - “I Will Follow Him” (1963).

RMP What do you want the reader to learn after reading the book?
TL This book became a reality thanks to COVID-19. With my travelling and physical interfacing with clients dramatically reduced, I was able to move this project from the corner of my desk and dedicate the appropriate amount of time required. However, my motivation, was to put smiles back on people’s faces and what better way than the tunes we grew up with in the 50s, 60s, and 70s. Also, I was confident that the featured songs, as they were being heard by the readers, would conjure up unique memories of past experiences – in a sense the book became a platform for‘theatre of the mind.’

RMP List your all time favorite musical band and why.
TL This is tough question. However, if I would have to pick one it would be The Rascals. Inducted into the Rock & Roll Hall of Fame in 1997, they had three number one hits and epitomized blue-eyed soul of the mid-to-late 60s. I have four of their songs on my jukebox.

RMP The book has many lively stories, can you describe 3 memorable ones?
TL In terms of most memorable, here are three that immediately come to mind:

RMP What’s next on the musical road for Tom Locke?
TL Now the fun begins. I have just completed my 2022 marketing and promotional plan for the book that includes accumulating more 5 STAR reviews, doing some more online radio interviews, partnering in the marketplace with organizations and charities that have a similar demographic and creating a seminar on the “Music That Made Us Who We Are.” I am also considering creating a program for aspiring self-publishers on how to market and promote your book prior to, during, and after the writing period. And yes, there will be another book with more of these stories down the line.

Final Comments:
I am so glad to have self-published this book. I learned a lot about the publishing game – talk about life-long learning. Assisting me along the way was The Self Publishing Agency (www.theselfpublishingagency.com) – their guidance and expertise proved to be invaluable.

You can learn more about Tom's book 'Moments In Time' by visiting his website at mitstories.com.