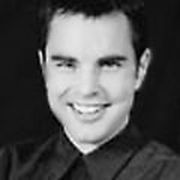 A group of young producers and actors (Shira Elias, Christopher King, and Jennifer Suratos) under the musical direction of talented Scott Knight has come up with its first production, a musical revue of songs from shows written in the last twenty years.

In their production notes, they founded Ignite Productions "to kindle the creative fires inside of us...we wanted to sing." They came up with a loose storyline revolving around eight people helping one another to overcome obstacles and achieve their goals, and picked seventeen Broadway musical songs to put the story together.

And the show was good! They sang so well that some in the audience not only whistled but also shouted bravos and gave them a standing ovation at the end of the opening night's performance.

The company started off with "Heart and Music" from the musical A New Brain and ended with "Louder than Words" (Tick, Tick...Boom!).

In between, these talented singers burst out with all their energy and talent with fabulous songs like "A New Life" (Jekyll and Hyde) from 20-year old Nicole Stevens; "She Cries" (Songs for a New World) from professional actor/singer Scott Carpenter; "Life of the Party" (The Wild Party), sung by Shira Elias, reminding me of the vocal range of Barbra Streisand; "I'm not Afraid of Anything" (Songs for a New World) sung wonderfully by Jennifer Suratos, a veteran in Vancouver's community theatres; "Movin' too Fast" (The Last Five Years) and "I'd rather be Sailing" (A New Brain) sung by Eric Nelson, who got a few chuckles from the audience in his rendition of the lyrics "Sex is good, but I'd rather go sailing."

Three other singers were outstanding: Christopher King -- singer, writer, and music teacher; the charming Sarah Gay who just moved in from Toronto; and the fabulous Robert Markus with his fantastic rendition of "Use What You Got" (The Life). He got whistles and cheers after he did this number.

Despite the technical problems in sound -- the sound technician didn't seem to get the right sound volume and oftentimes, we couldn't hear some actors singing -- all in all, it was a good show, and I'd like to congratulate these young and enthusiastic singers for their excellent performances.