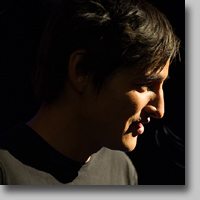 In a starkly grey stage set-up, Cliff Cardinal performs a vivid and agonizing story of life and death on a First Nations reserve. Cardinal also wrote Huff, which was immediately obvious to me – he has a deep and palpable connection to the script, the characters, their humour, and their pain. He does not shy away from the heart-wrenching moments, and impressively transforms into each character through changes in voice and body language.

This is no easy task, and Cardinal brings a lot of raw talent, raw emotion, and dark humour to his performance. Running through the story is the Trickster – the element of unpredictability in classic First Nations storytelling, or as Cardinal puts it, “the one drink too many before driving home.”

Opening the performance with a plastic bag duct-taped to his head and his hands bound together behind his back was an incredibly effective way to draw the audience in emotionally, right off the bat. The painful tightness I felt in my own chest watching Cardinal’s laboured breathing did eventually dissipate (once an audience member helped him take it off), but that tightness returned many times throughout this performance in many other heart-wrenching scenes.

The story centers around three brothers living on the res – products of an abusive father, an alcoholic mother, and a very flawed residential school system. Cardinal plays all characters, including Trickster, Angelina the pet dog, a violently confrontational Skunk, and even Smell (personified). Dealing with the aftermath of their mother’s suicide, the boys endure neglect, solvent abuse, physical and sexual abuse, and more.

Many elements come together to make this performance extraordinary. In one scene where the boys set fire to some porn magazines while huffing gasoline, Lighting Designer Michelle Ramsey does an incredible job conveying the flames of a burning motel room on the stage. Cardinal is absolutely captivating and holds nothing back in his show, and I’m not ashamed to say it got very rainy on my eyes during a scene where the brothers’ nohkom (Cree for grandmother) began her chanting and prayers in the woods. The prayers in Cree are particularly striking, and while this play may not fix problems or save lives, the performance does end on a beautiful note with these prayers. This play tackles some pretty intense subject matter and pulls no punches while doing so. But it does so with genuine love, honesty and care – a prayer of sorts for the ones trying to survive their own stories today.