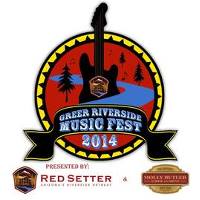 Greer, Arizona is 8,200 feet above sea level and is a haven, in particular, for people from Phoenix and Tucson in the hot Southern Arizona summer months. Yesterday the Greer Riverside Music Festival was held on the grounds of, and sponsored by, the recently re-opened Red Setter Inn and a co-sponsor was Molly Butler’s. Huge pine trees, the Little Colorado River running through the grounds, ample shade, good food, and beer and wine on tap, all made for a beautiful setting for this festival which was chock full of Arizona musicians.

I missed the opening act, a country singer by the name of Mary Hoffman from Arizona who has been the warm-up act for many country artists through the years, including Kenny Chesney, Keith Urban, Gary Allen, Easton Corbin, amongst others. In 2012, Mary won a "Sing with Sugarland" contest and had the privilege of singing, "Baby Girl" with Sugarland at their "In your Hands" tour stop in Phoenix.

Freddy Duran, in past years named Arizona Songwriter of the Year and New Mexico born, was joined by Carole Pellatt, the Montreal born free lance guitarist, and their duets, and the guitar notes played, definitely gave their songs a very “Spanish” sound. They sang “New Mexico Midnight” a love song Freddy wrote in Los Angeles about his home State, and a fabulous slow version of U2’s “I still haven’t found what I‘m looking for.” First time I have heard a great alternative cover to that U2 classic.

The next Group up was Gray Wolf with keyboards, guitar, drums, and a female singer with a great voice. They sang the blues, and lots of great rock including covers on Credence Clearwater, Journey, Rod Stewart, Stevie Wonder, Neil Diamond Fleetwood Mac and my absolute favorite by them Delbert McClinton’s “Every Time I roll the Dice.”

The Festival started on Friday evening with Cowboy Up at Molly Butler's in Greer featuring Chuck E Baby and Marty Mitchell and on Saturday evening, after the Greer Riverside Music Fest, a Jam Session led by Chuck E Baby kept the music flowing at Molly Butler's (until closing or maybe later?). Apart from the glorious setting, nice to know that proceeds from T shirts and food and drink were going to a group of local no-profits. Also good to see the local High School Radio present interviewing the groups and preparing for careers perhaps in Show Planning. I was sorry to leave after 5 hours of great music and ambiance in a very relaxing setting and it was good to support original Arizona musicians.