Gateway Theatre is embarking on a 15-year summer festival project presenting plays from different regions of the Asian Pacific. The inaugural festival showcases plays from Hong Kong: Detention, The Isle and The Fire of Desire. 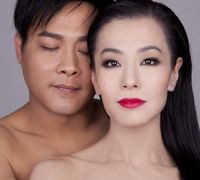 The Fire of Desire

Based on the classic 1900 play Reigen by Arthur Schnitzler (better known by its French title La Ronde), the play updates the setting to present day Hong Kong, where five men and five women explore their frustrations and perspectives on love, marriage, and sex in ten different scenes, each scene taking place in a room with a different man and woman.

Established in 2005, Perry Chiu Experimental Theatre celebrates women in theatre and reimagines the classics through creative integration of physical theatre with popular and new music.

Before the show, I spoke to Producer Esther Ho who said that this is the start of a 15-year project that will hopefully bring modern Chinese theatre to audiences all over Canada, catering mostly to Cantonese and Mandarin-speaking Chinese. For non-Chinese speaking audiences, there will be surtitles in English similar to what ensued during this inaugural festival. 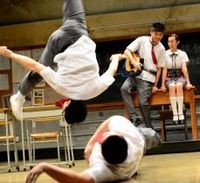 This 80-minute non-verbal physical comedy for all ages is classic Hong Kong humor, combining acrobatics, clowning, martial arts and percussion. Performed by a group of talented comedians, drummers, tap dancers, xiqu (Chinese Opera) performers and even a Kung Fu master. This full-house performance was received enthusiastically by Vancouver audiences during their weekend performances.

The story is set during an after-school detention session where three naughty boys are joined by a gorgeous classmate, and they end up turning “detention” into a talent competition for her affection. When their short-tempered yet ‘extraordinary’ teacher suddenly checks in on them, a series of crazy classroom scenarios play out in a comical and farcical manner.

This fast-moving cartoon-style comedy, all done with guttural sounds, grunts and sighs, is full of frenzied action, mayhem, and the cast of five talented performers give the audience a memorable performance.

Tang Shu-wing Theatre Studio (named after its director and founder) has toured internationally and has participated in the Globe Festival at the Shakespeare’s Globe in the London Cultural Olympiad 2012 and became the first Cantonese production ever performed in that theatre. The company's international tour has brought them to Fredrikstad (Norway), Wroclaw and Bytom (Poland), Beijing, Taipei, the, Arts Festival of Hong Kong in October 2012, and the Huayi Festival of Arts in Singapore in February 2013. 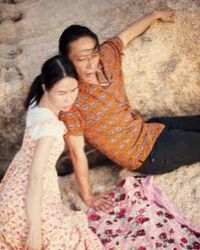 Hong Kong's Theatre du Pif was formed in Scotland in 1992 by Bonni Chan who plays the female role in this 90-minute play in Cantonese with surtitles in English. What caught my attention in this matinee show was the fragrance of roses that filled the air as petals fall from above at the end of the play.

What doubly caught my attention also was the toxic smell of burning paper as Lee Chi-man, the male performer in this play burns letters in a trunk. The smoke alarm in this studio theatre was probably turned off during this production. It;s a pity that I couldn't focus too much on the acting because I spent more time reading the translation.

But the actors performed well.The play is described as "a poetic reflection on love" written by Hong Kong playwright Paul Poon, about a couple`s encounter on a remote island. What confused me at first was whether the man she was waiting for was the same man she encountered. And towards the end, we realize that indeed, it is the same man because he reads the letter from memory to his blind lover.

It is poetic in the sense that Director Janice Poon (perhaps wife of the playwright) combines elements of ballet in the actors`movements as well as Stage Design (Terrenz Chang), Lighting Design (Lau Ming-hang) and Sound Design (Vincent Pang) that give a certain romantic mood to the play.

At the end of the play, Chan thanked the audience and Gateway Theatre for making this production possible.