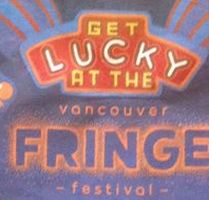 The Program Guide Launch Party for this year's festival kicked off at the same venue, Big Rock Urban Brewery, as it did in previous years. Beer and pizza was the usual flair and a program of live jazz music and a sample of one of the shows coming in September, The Birdmann, by standup Australian comic and funnyman Trent Baumann opened the programme.

Outgoing executive director David Jordan gave his farewell speech announcing that this was his last year at the Fringe. He'll be working with the City of Burnaby. Communications Manager Debby Reis also introduced the Programme for this year's fest, stating that the theme is a casino one, saying that number 7 is the lucky number this year as the fest goes from the 7th till the 17th. She also mentioned that they did a sneak article without Jordan knowing about it. The article "Making His Mark: 12 Years with David Jordan" was by Reis herself.

I've been personally involved with the Fringe since the early 1990s first as playwright and director and later as a reviewer. As a playwright, my one-act play The Caged Dream was directed and acted by my students when I was teaching an Acting course at the Continuing Educaion Department in Langara. Then the next year, one of my students, Elmer Wiens asked me to direct his play Critical Paths with the same cast and of my former students. After that, I founded Reviewvancuver and reviewed the Fringe shows these past 20 years, together with my staff of reviewers.

It's been a journey for me just as it has for Jordan and Reis, but the show must go on, as they say in theatre parlance. And the Vancouver Fringe will live on because theatre, especially in its rawest form as it is in the Fringe is the end-all and be-all of mankind!